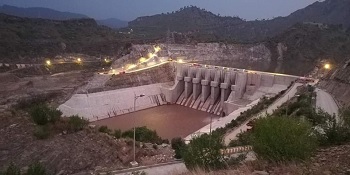 MUZAFFARABAD: Gulpur Hydropower Plant (GHPP) is an under construction. Located on Poonch River, a major tributary of Jhelum River near Gulpur in Kotli District of Azad Kashmir, Pakistan. The site is about 167 km from Federal Capital Islamabad and 285 kilometres from Lahore and is approachable directly from Islamabad and Lahore by a two-lane, all weather paved, partly mountainous road. The location of the Project is about 28 km upstream of Mangla Dam Reservoir

Gulpur Hydropower Project is a run-of-the-river project designed for the generation of 100 megawatts (130,000 hp) consisting of two Kaplan-type turbine units with average energy output of 436 Gwh.[2] Gulpur Hydropower Project is a part of least-cost energy generation plan, being executed by WAPDA to harness the indigenous hydropower resources of the country. WAPDA awarded the contract to MIRA Power Limited, a subsidiary of Korean company KOSEP, an independent power producer (IPP) being developed in private sector on BOOT basis (Build, Own, Operate and Transfer) under Government of Pakistan Policy for Power Generation Projects 2002 as adopted in Azad Jammu & Kashmir. The project has the capability of generating an average annual energy of 465 GWh.