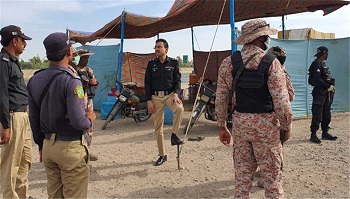 KARACHI: More than 50 police personnel have so far tested positive for the novel coronavirus in Karachi, officials said on Monday. According to reports, six inspectors are among the 51 personnel of the Sindh Police whose tests have returned positive.

Of these, one inspector has recovered from the disease and has been discharged from the hospital, while the rest are admitted to the isolation wards of different hospitals in the metropolis, said a police official.

On Monday, two police personnel, including a sub-inspector and a head constable, were confirmed to have been infected with the coronavirus while performing their duty at a cash distribution facility of Ehsaas Programme at the Government Degree College, Quaidabad in Karachi. “So far, no police official has been infected with the virus in other major cities of Sindh,” the officer added. According to Karachi City police chief Additional Inspector General Ghulam Nabi Memon, the majority of infected police officials in the city were not those deployed in active field duty. He pointed out that one of the infected inspectors was from the investigation branch while the other one was working as a staff officer.