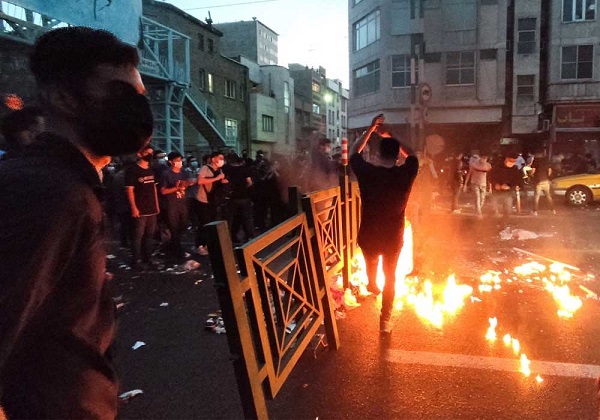 “We call on the international community to decisively and unitedly take practical steps to stop the killing and torture of protesters,” said IHR director Mahmood Amiry-Moghaddam, adding that video footage and death certificates obtained by the group showed “live ammunition is being directly fired at protesters.”

Iran has arrested more than 1,200 protesters, officials said, in its lethal crackdown on 10 nights of unrest driven by outrage over the death of Mahsa Amini in morality police custody.

Tensions grew between the Islamic republic and Western nations as Germany summoned the Iranian ambassador, a day after the European Union protested the “widespread and disproportionate use of force” and Tehran called in the British and Norwegian envoys.

Protests flared again across Iran overnight as a Tehran crowd shouted “death to the dictator”, calling for the end of the more than three-decade rule of supreme leader Ayatollah Ali Khamenei, 83, in footage shared by Oslo-based group Iran Human Rights (IHR).

“Woman, Life, Freedom!” the crowds have chanted as female protesters have defiantly thrown their hijabs into bonfires and blazing rubbish dumpsters — a rallying cry that has been echoed at solidarity protests worldwide, including in London and Paris at the weekend.In Iran’s biggest protests in almost three years, security forces have used water cannons but also fired birdshot and live rounds, according to rights groups, while protesters have hurled rocks, torched police cars and set public buildings ablaze.

The total number of officially reported arrests rose above 1,200, according to state media reports citing various officials, including about 450 in northern Mazandaran province, over 700 reported Saturday in neighbouring Gilan and dozens in several other regions.

Tehran police have been deployed “24 hours a day” and many have not slept, said the Iranian judiciary chief, Gholamhossein Mohseni Ejei, thanking exhausted officers and the capital’s police chief during a visit to their headquarters on Sunday, in a video posted by Mizan Online.

Ejei earlier stressed “the need for decisive action without leniency” against the protest instigators. Several security officers have been killed in the unrest, according to Iranian media. But a powerful Shia cleric long aligned with the country’s ultra-conservative establishment urged authorities to take a softer line.

“The leaders must listen to the demands of the people, resolve their problems and show sensitivity to their rights,” said Grand Ayatollah Hossein Nouri Hamedani on Sunday.

Despite sweeping internet restrictions, including blocks on Instagram and WhatsApp, new videos shared widely on social media showed protests in Tehran and cities including Yazd, Isfahan and Bushehr on the Persian Gulf.

Norway-based Kurdish rights group Hengaw said a protest was held in Amini’s hometown of Saqqez “despite a heavy military presence”, and there were reports of a 10-year-old girl being shot and hospitalised in the northern town of Bukan.