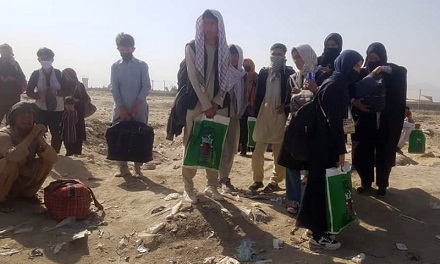 KARACHI: Female footballers from Afghanistan along with their families crossed the Torkham border to reach Pakistan on Tuesday night after the government issued emergency humanitarian visas to evacuate them from their country following the Taliban takeover.

The footballers belonging to the national junior girls team were facing threats from the Taliban due to their involvement in sports. They had been originally due to travel to Qatar, where Afghan refugees have been housed at a facility for the 2022 FIFA World Cup, but were left stranded after a bomb blast at the Kabul airport on Aug 26.

While most of the Afghanistan national women’s team had flown out in the last week of August after an arrangement with the Australian government, the youth team were unable to get flights because they lacked passports and other documentation. They had since been in hiding to evade the Taliban.

The move to bring the 32 footballers — a total of 115 people, including their families — to Pakistan was initiated by British-based NGO Football for Peace in cooperation with the government and the Pakistan Football Federation of Ashfaq Hussain Shah, which isn’t recognised by FIFA.