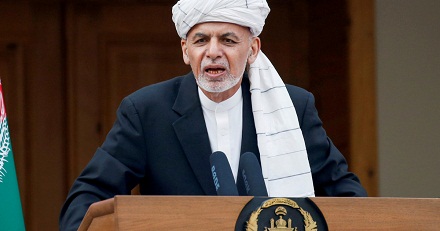 KABUL: President Ashraf Ghani in Kabul, urged the international community “to review the narrative of the willingness of the Taliban and their supporters on embracing a political solution”.

“In terms of scale, scope and timing, we are facing an invasion that is unprecedented in the last 30 years,” he warned in a speech on Wednesday.

“These are not the Taliban of the 20th century... but the manifestation of the nexus between transnational terrorist networks and transnational criminal organisations.” Analysts say China, whose stated foreign policy position is non-interference in other countries’ issues, is queasy about the religiosity of the Taliban given their proximity to the Xinjiang province.

But the meeting gifts legitimacy to an insurgent group craving international recognition — and a potential diplomatic shield at the UN — to match their military march across the nation.

“China has throughout adhered to non-interference in Afghanistan’s internal affairs... Afghanistan belongs to the Afghan people,” he said, in stark contrast to the “failure of US policy towards Afghanistan”.

“Afghan people have an important opportunity to stabilise and develop their own country.”

For Beijing, a stable and cooperative administration in Kabul would pave the way for an expansion of its Belt and Road Initiative into Afghanistan and through the Central Asian republics.

The Taliban, meanwhile, would consider China a crucial source of investment and economic support.