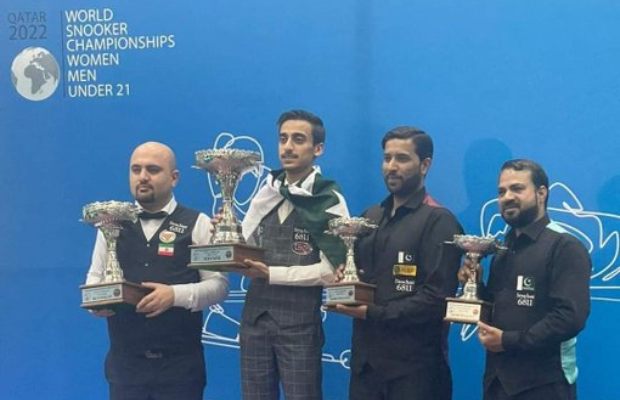 KARACHI: Teenage sensation Ahsan Ramzan elevated his stature when he outpaced former runner-up Iranian Amir Sarkhosh 6-5 in an epic final to lay his hands on the International Billiards and Snooker Federation World Snooker Championship in Doha on Friday.

Pakistan ended the event with a gold and two bronze after Sarkhosh had beaten Mohammad Sajjad in the other semi-final.

Ahsan became the second-youngest cueist to clinch the world title after China’s Yan Bingtao, who did it at the age of 14 defeating Sajjad in the title clash at Bangalore in 2014.

Ahsan also became the third Pakistani to win the world snooker championship since its inception in 1963 after veterans Mohammad Yousuf (1994 at Johannesburg) and Asif (2012 and 2019 at Sofia and Antalya).

The Lahore-based prodigy had a brilliant start as he surged into a 2-0 lead after winning the first two frames that also included a solid break of 70 in the second.

Sarkhosh, who took time to settle, came into the game by winning the next four frames on the trot, including a century break (102) in the fourth.

Ahsan, however, recovered to reduce the lead to 3-4 by taking the seventh frame but again fell prey as his opponent won the next to lead by 5-3 in the best of 11 frames encounter needing a frame to wrap up the match.

But Ahsan kept his cool and cue control to turn the tide in his favour by winning the remaining three frames in a row.

Ahsan had halted the winning streak of Asif in a gruelling semi-final that was stretched to the limit and saw the former claim a 5-4 victory on the penultimate day.

This was Ahsan’s second victory over two-time world champion, the last being in quarter-final of the 46th National Snooker Cham­pionship held in Karachi six months ago.

In the other semi-final, Sarkhosh had also edged Sajjad 5-4 to book his place in the final.

Sajjad had a dismal start as he trailed 1-4 in the best of nine match. It was from there that he roared back into the match to tie at 4-4. But Amir scored a brilliant break of 64 in the decisive frame that enabled him to cruise into the final.

Both the semi-finals lasted little over five hours.

“It’s like a dream come true as the cueist did his country proud,” he told Dawn after the final.