AJK President warned of catastrophic outcome of the situation 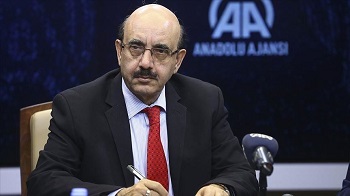 MUZAFFARABAD: India “complete silence” of the United Nations over the happenings in India-held Jammu and Kashmir, Azad Jammu and Kashmir (AJK) President Sardar Masood Khan on Sunday warned of catastrophic outcome of the situation rapidly developing in the disputed region.

Addressing a conference through an online link, he pointed out that the India-held territory was under a double lockdown since Aug 5 last year; and with the coronavirus lockdown, the region warranted immediate attention of the international community.

The conference was orga­nised by Tehreek-e-Kashmir (TeK), a Birmingham-based organisation in the UK working on the Kashmir dispute. Chaired by TeK president Fahim Kayani, the conference was attended by more than 50 of its office-bearers from 20 towns in the UK through an internet link.

“While the world is fighting the new coronavirus, India’s occupation machinery is mercilessly killing the Kashmiri youth during the so-called cordon and search operations and then posthumously and falsely accusing them of militancy,” Mr Khan said.

He lamented that thousands of arbitrarily detai­ned prisoners, mostly young boys, were “rotting in cramped concentration camps and jails in the occupied territory and India and the fascist Indian government had ignored appeals of six international human rights organisations for their release”.

The AJK president alle­ged that Covid-19 patients in held Kashmir were not being given proper care.

Restrictions on high-speed internet were not only multiplying the number of such patients but had also brought the medical fraternity under severe stress, he said.

Mr Khan recalled that early this month Indian government had introduced a new domicile law to grant permanent residence to Hindus from India to reduce Muslim majority in the territory to a minority.

He regretted that only the Organisation of Islamic Cooperation condemned the Indian move but powerful nations remained silent.

“Even the traditional allies of the people of Jammu and Kashmir have no time to speak up,” he said.

The AJK president urged the diaspora communities in the UK and Europe to mobilise the British parliamentarians and the All-Party Parliamentary Group on Kashmir to call out India for its actions which he said constituted war crimes, crimes against humanity, ethnic cleansing and genocide.