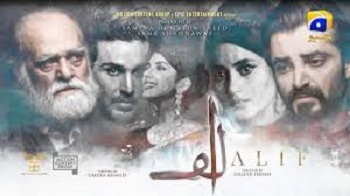 Alif doesn’t end on the usual happy note of lovers united with all issues resolved, if anything it ends on a rare, higher note, acknowledging Qalb-e-Momin’s need for time and growth, while allowing Momina to find her way to him instead of immediately abandoning her successful career.

Marshalling such a difficult multi-layered storyline with so many characters deserves a standing ovation in itself. As with anything touching on religion and spirituality, there is a grave danger of sermonizing but happily, Hassan has walked that edge very carefully avoiding many pitfalls.

The parallels between Momina and Husn-e-Jehan are obvious, as is the courage of Momina to not follow her heart and fall into the same trap of self-abasement and denial that Momin’s mother did.

Too often our dramas characterise women as fools or martyrs for love, who suffer misfortune and the untenable demands for purity and absolute fidelity that society and the men in their lives place on them.

How revolutionary then that Ahmad’s heroines find success on their own terms: that Husna, doesn’t shatter and disappear because her son cannot forgive her or her husband abandons her but she ultimately marries a compassionate man who treats her well before she dies.

How revolutionary that Momina learns to respect her craft instead of despising it. She too suffers an earlier loss in love, when Faysal (Osman Khalid Butt) wants her to abandon everything for him with the same condescension Taha showed Husn-e-Jehan, but each time Momina steps back and decides her own worth.

There is a wonderfully played scene where the now-married Faysal calls Momina to congratulate her on her success, his tone and the insinuation is that of a door being left open for the kind of dependency that a weaker woman might fall into.

Thankfully, this writer’s heroines are never fools; they know their self-worth is intrinsic, unearned and Momina closes the door on all the painful sentimentality of past dreams with a firm stance.

This serial is full of outstanding vignettes and scenes. Kubra Khan and Ahsan Khan do full justice to their roles bring out the dysfunctionality but also the strength of the bond between Momin’s parents.

Ahsan Khan portrayal of Taha is flawless and layered, he is a good, but ultimately weak man, who, despite his devotion to religion, is unable to govern this anger.

Kubra, in particular, has given us an outstanding performance, proving herself again as a versatile and skilled actress. It really helped that she looked stunning in all those seventies get-ups too.

The entire serial is studded with fantastic performances from the subtle manipulations of Osman Khalid Butt as the not quite hero, Faysal to the gentle, compassionate fidelity of Master Ibrahim (Saife Hassan) and the powerful edge that Manzar Sehbai gives to Momin’s grandfather.

Too often our dramas characterize women as fools or martyrs for love, who suffer misfortune and the untenable demands for purity and absolute fidelity that society and the men in their lives place on them . How revolutionary then that Ahmad’s heroines find success on their own terms.

Haseeb Hassan has brought out the best from each character and its hard to ignore a single actor but a special shout out to Saleem Mairaj who put in the work for Sultan Shah and gave us a tour de force. Similarly, Fareeha Raza and Musadiq Malik deserve so much praise for playing the kind of friends everyone needs with such authenticity.

Last but not least, we cannot forget Momin’s house help Shakoor, who manages to reveal every secret his domineering boss would like to keep with the kind of pitch-perfect deadpan innocence that made me want to laugh out loud.

Of course, the stars of this show are Hamza Ali Abbasi and Sajal Aly.

It might have been easy for me to dismiss Abbasi’s role as an easy take from his own life but the actor’s hard work and sincerity to his craft shows in the excellent definition he has given Qalb-e-Momin.

Abbasi has made a deep impact on this role which will not be easily forgotten. Momin isn’t a particularly likeable character, displaying the full range of misogyny, toxicity and the worship of materialism that defines an alpha male in our dramas of late.

The difference with Ahmad’s writing is that none of these characteristics are romanticised, nor do they in any way endear him to the heroine Momina or to the other women in his life.

Sadaf Kanwal as his manipulative ex, and Yeshma Gill as the equally slippery opportunistic actress were a pleasure to watch, and apart from using Momin’s foolish actions and lack of self-control, they had little affection for him.

Momina only forms a connection with Momin when she finally sees some evidence of vulnerability and kindness when he returns calligraphy to her. Umera Ahmad is not known for writing love stories but with director Haseeb Hassan’s expert help and Sajal Aly’s perfectly restrained performance, these were scenes to remember.

Aly is a supremely-talented actress, playing every note in Momina’s life from the heart and connecting to the audience in a way none of the other characters could.

As a director, Haseeb Hassan has set a new standard for himself, with this beautifully shot, highly evocative serial.

Marshalling such a difficult multi-layered storyline with so many characters deserves a standing ovation in itself. As with anything touching on religion and spirituality, there is a grave danger of sermonizing but happily, Hassan has walked that edge very carefully avoiding many pitfalls.

While I am happy to call Alif a rare work of art , I wish Hassan had defined past and present more clearly with some visual clues such as lighting. The soft filters or cameras used gave a faded, sentimental sheen to even the most dynamic scenes and that is something he should definitely reconsider in his future work.

Just like the period piece Angan, Alif lost out on the rating game at times because of this.

Haseeb Hassan is one of our finest directors but he does have a tendency to be inspired by other dramas, there were several scenes that brought to mind iconic sequences from Humsafar towards the end, such as Momin crying and looking in a mirror a little too much like Asher.

Hassan is a very creative man himself so I am hoping it was sheer coincidence.

Like Umera Ahmad’s previous work Shehr-e-Zaat, this story has a strong spiritual message, that has not been lost in some grand romance, rather it replaces the ephemeral spirit of worldly love with attachment to the divine.

Neither Momin nor Momina’s strength to get through the challenges life throws at them because “mere pass tum ho “. Instead, they learn to rely on their developing spirituality, which asks them to rise above the base emotions of anger and jealousy and instead to nurture forgiveness, compassion and generosity of spirit within their personalities.

Umera Ahmad is an incredible writer and she has given us an extraordinary script. It would be fair to say that a little dialogue pruning wouldn’t have hurt, and maybe an episode or two less might have kept the dramatic tension on a tighter string.

Overall, this is one of the most refined and artistically pleasing dramas we have seen on our screens in years.

A word of thanks to producer Sana Shahnawaz who produced such an intricate project so well and even more thanks to TV channel Geo for having the courage to pit what is obviously not an out and out commercial venture on primetime.