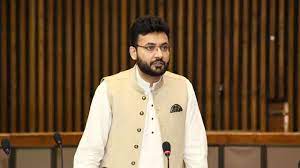 Minister of State for Information and Broadcasting Farrukh Habib has said Pakistan Muslim League Nawaz (PML-N) could not do anything for the people of Azad Jammu and Kashmir.

Talking to a private television channel, he said the popularity graph of PML-N went down due to anti-Kashmir speeches.

He said AJK people extended their full support to the candidates of Pakistan Tehreek-e-Insaf during recent elections.

The minister of state said Prime Minister Imran Khan raised the voice and pleaded the case of Indian Illegally Occupied Jammu and Kashmir’s people at all the international fora.

Replying to a question about the AJK prime minister’s nomination, he said Imran Khan would decide about the new AJK chief executive.