Army announced completion of deployment of troops across country 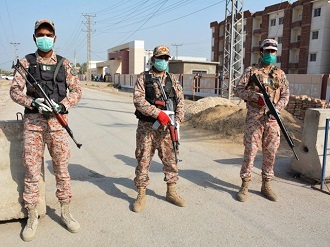 ISLAMABAD: Pakistan Army on Saturday announced completion of deployment of troops across the country for assisting civilian authorities in containing the spread of Covid-19 with a major focus on managing 182 quarantine facilities.

“Pakistan Army troops deployed across the country in aid of civil power under Article 245,” Inter-Services Public Relations, the military’s public affairs wing, said in a statement.

The deployment was approved by Chief of the Army Staff Gen Qamar Javed Bajwa last Monday (March 23) on the request of the interior ministry. The government had asked for deployment of troops in all four provinces, Islamabad, Gilgit-Baltistan and Azad Jammu and Kashmir under Article 245 (functions of the armed forces) of the Constitution and Section 131(A) (power to use military force for public security and maintenance of law and order) of the CrPC.

The army’s statement did not mention the number of troops deployed for the anti-coronavirus operation. However, military spokesman Maj Gen Babar Iftikhar had on Monday said that “available troops” and all medical resources would be deployed as per requirement. The army, while committing troops for the anti-Covid-19 effort, had to take into account the situation at the Line of Control and Working Boundary, where India was maintaining an aggressive posture and regularly committing ceasefire violations; and on the border with Afghanistan.

Military observers believe that troops already allocated for internal security have been re-appropriated for this task without significantly disturbing the deployments on the tense eastern and western borders.

The role to be performed by the troops was once again defined in the ISPR statement, according to which there were assisting federal and provincial governments in enforcement of the measures for containment of Covid-19. The troops are also helping in contact tracking, identification and isolation of suspected cases and the management of 182 quarantine facilities that have been set up across the country.

ISPR said: “All points of entries (POE) were being manned and monitored, joint check posts have been established and joint patrolling was being undertaken along with other Law Enforcement Agencies”.