Atif Khan and two other ministers of KP removed 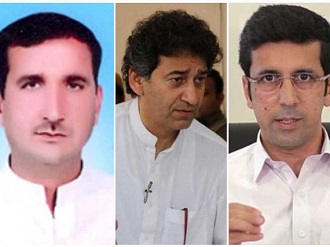 ISLAMABAD: Atif Khan and two other ministers of Khyber Pakhtunkhwa have been removed for “bypassing” the leadership in an attempt to secure support of power brokers for bringing a no-trust motion against Chief Minister Mahmood Khan.

During a meeting in Lahore with close confidantes late Sunday, Prime Minister Imran Khan is said to have shared what troubled his relations with Atif Khan, his long-time favorite to whom he wanted to nominate for chief minister slot in 2018 but couldn’t after his opponent lobby led by Pervez Khattak prevailed. By then, he had declared Atif as an “honest man who is not in politics to make money” and that he does politics of principles.

Imran named a retired old man whose relations in powerful quarters made him a darling of many power-seekers, according to an insider, and said Atif met him to gather support for the slot of chief minister-ship.

“Will I change CM on thedirections of somebody?” PM asked with reference to a powerful man. “I will not do this,” he asserted. As he shared these thoughts Sunday noon, Atif and two other ministers of his group were de-notified almost three hours later. This decision is being touted as an attempt to quell unrest in Punjab, KP and at federal level as well as to send a message to all concerned that he will not take any dictation, said a participant of the meeting.

Atif was minister of sports, culture and tourism, Shahram held the charge of health whereas Shakeel was minister for revenue and estate department. KP was considered relatively calm politically; however, a war of words started a couple of days ago after Arshad Aziz Malik reported in this newspaper’s edition of January 23 about the simmering differences.

It was about the five ministers and 20 MPAs having joined the forces against CM Mehmood. They alleged him for poor governance and said corruption had increased in the province under his watch.

They declared Mahmood Khan as Usman Buzdar Plus and accused his principal secretary and that of PM running the whole show in the province. CM Mehmood had denied this. He then told Arshad Aziz that PM Imran Khan had authorized him to remove or induct anybody into the cabinet.