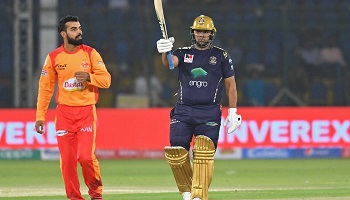 KARACHI: Remarkable knock by Azam Khan as Quetta Gladiators launched their defence of the title with a scrappy three-wicket victory over two-time former champions Islamabad United.

Azam, the 21-year-old son of ex-Pakistan captain and Quetta head coach Moin Khan, displayed amazing power-hitting to rescue his side from a precarious 26-3 with a brilliant contribution of 59 in only his second T20 appearance. The Gladiators got over the line with nine balls to spare.

The stocky right-hander replicated former Pakistan great Inzamam-ul-Haq with a series of power-packed strokes to strike five fours and three sixes during his 33-ball knock. He added 62 in 40 deliveries with captain Sarfraz Ahmed (21) and 40 in 18 with Mohammad Nawaz (23 off 13) before Ben Cutting brought smi­les in the Quetta dugout by effortlessly lifting new Islamabad skipper Shadab Khan over the long off fence for the winning stroke.

Earlier, a devastating spell by pacer Mohammad Hasnain put Islamabad United on the back foot from the start of their innings. His fearsome pace and nagging length brought him a match-winning haul of 4-25 and the Man of the Match award . He was ably supported by Cutting (3-31). The Hasnain-Cutting duo triggered a dramatic Islamabad United collapse after Sarfraz stuck to his formula of bowling first upon winning the toss. The opening ceremony forced the game to start 5 minutes late.

But Quetta continued to chip away as Islamabad kept losing momentum, both in terms of the run rate and wickets. A position of ascendancy soon descended into a tale of despondency as the two-time champions nosedived from 106-2 after 11 overs to 168 all out at the beginning of the final over. They lost the last eight wickets for an addition of just 62 runs.

Malan’s innings of 62 off 40 deliveries, featuring five boundaries and three sixes, was terminated by Cutting, the Australian seamer who forced the left-hander to loft a catch to Roy inside the long-off boundary in the 15th over.

And the only significant partnership was provided by Malan and Hussain Talat, who together put on 68 in 44 balls for the fourth wicket.