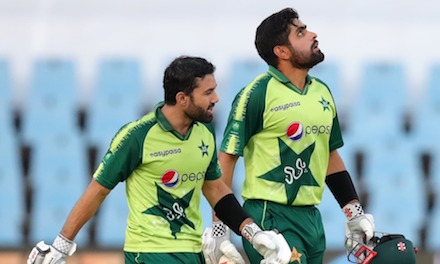 With a remarkable win over South Africa in the third twenty20 international (T20I), Pakistan captain Babar Azam and his partner Mohammad Rizwan stormed the record books with several accolades to their names.

Pakistan chased the 205-run target comprehensively with 12 balls remaining and at the loss of just one wicket to mark one of the country’s most memorable run-chases.

Babar, who scored career best 122 and became the third Pakistani to score a T20I century, added 197 with Mohammad Rizwan for the first wicket to mark Pakistan’s highest opening partnership in the shortest format of the game.

Meanwhile, wicket keeper batsman Mohammad Rizwan remained not out with individual score of 73. This was the batsman’s third half-century in run-chases; the greatest number of half-centuries by a Pakistani batsman while chasing a target.