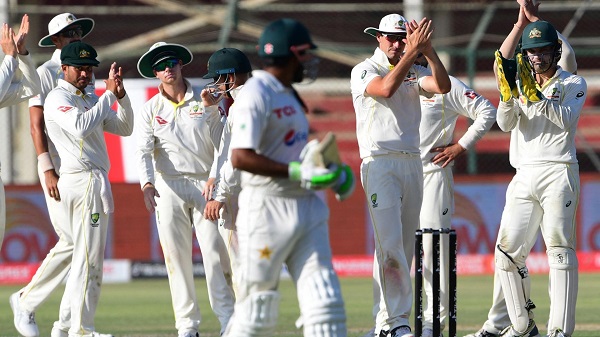 KARACHI: Babar Azam’s incredibly patient and clutch knock in the fourth innings of the second Test was quite comfortably the highlight of the match. With the game and the home team’s pride on the line, Babar came in to bat on Tuesday when the team was reeling at 21 for 2.

He formed an incredible 228-run partnership for the third wicket with Abdullah Shafique but did not flinch even when the young’un departed a few short of his century today.

The skipper had completed his 100 the previous day and was closing in on his first-ever double century when he fell prey to Nathan Lyon. In all, he scored 196 off 425 balls, hit 21 boundaries and a solitary six.

His innings may have ended in a heartbreak but it took nothing away from his performance.

It was a day to remember for Babar, who played his best and most memorable knock in Pakistan colours — certainly in Tests and maybe even in all formats. Here is a full list of records he broke today:

Most balls consumed by a Pakistan batter in 4th innings
Babar Azam consumed 425 balls, which makes his knock the longest ever in the 4th innings by a Pakistani batter in Test cricket. The record was previously held by Shoaib Malik, who had consumed 369 balls in his knock of 148* against Sri Lanka in Colombo in 2006.