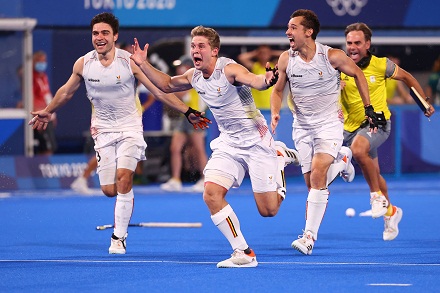 TOKYO: Belgium won their first Olympic men’s hockey title, beating Australia 3-2 in a penalty shootout after the final finished in a 1-1 draw on Thursday.

The sides were locked in a close fight through much of the match, with Belgium forward Florent van Aubel giving the Red Lions the lead two minutes into the second half.

Australia equalised thanks to a goal by Tom Wickham, sending the match to the shootout, in which Belgian goalie Vincent Vanasch saved three attempts from the Kookaburras, including a retake from Jake Whetton following a video referral. But Vanasch saved Whetton’s second try, winning Belgium the title.

“We were really focused and then I did the job at the end,” Vanasch told reporters. “I’m really happy. I think all of the Belgian people are proud today of the Belgium national team.”

Belgium had to wait an extra year to improve on their second-place performance in 2016.

“Standing on the biggest stage on the biggest podium for a small hockey country as Belgium is a crown on all the hard work,” forward Thomas Briels said. “And a lot of respect to all the teammates — we work so hard — and people behind the scenes of hockey in Belgium.”

Australia, who won the silver medal, claimed their last Olympic title in 2004.

“It’s a tough way to lose the gold medal,” Australia’s goalie Andrew Charter said. “We didn’t want to go to shootouts. We had the lion’s share [of the game] at the end. If you let it go to shootouts it can be a bit of a coin toss sometimes.”