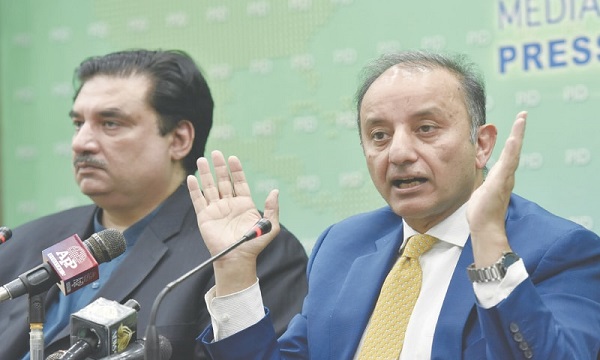 ISLAMABAD: Federal Minister for Power Khurram Dastgir Khan at a joint news conference with Minister of State for Petroleum Dr Musaddik Malik said, “Reduction in the international prices (of oil, gas and coal) is not expected over the short to medium term period, not in six months at least. Therefore, responsibility requires it is better to take difficult decisions now, rather even more difficult decisions six months later,” said.

Speaking at a joint news conference, Mr Dastgir and Mr Malik squarely blamed the previous PTI government for energy sector challenges including loadshedding, rising circular debt and expensive energy because of the failure to make timely arrangements for coal, LNG and furnace oil for power plants or reduce system losses, improve performance of companies or making payments to suppliers.

He said the poverty situation had so aggravated over the last three and half years, according to latest data, that four out of six families were living on monthly incomes of Rs18,000-25,000 and the leadership did not want them to be further burdened by price hike.

He said these matters had been finalised to a large extent so that a part of the cost of minefields installed by the PTI are absorbed by the government and directed towards the rich instead of allowing the poor to be crushed by price hike.

He said these matters were also being settled with the IMF because Imran Khan not only reduced the fuel and electricity prices by Rs10 per litre and Rs5 per unit, respectively, but also froze them for four months with a total budgetary impact of Rs700-800bn without any formal approval or allocation compared to Rs520bn expenditure of the entire federal government.

He also dashed hopes that power cuts could be completely eliminated as it was ensured during May 1-12 holidays on the directives of the prime minister, saying the international coal prices had jumped from $100 per tonne to over $360 in a few months but the PTI government did not arrange coal imports. He conceded the loadshedding had been increased to two hours from one hour daily which was on the higher side on Thursday due to closure of 1,230MW Haveli Bahadur Shah Plant for maintenance.

He said the fiscal and technical mismanagement and incompetence of the PTI government could be gauged from the fact that more than 7,000MW generation capacity was closed when the new government took over and this included 5,820MW because non-availability of fuel and remaining because of delayed maintenance.

The petroleum division, he said, had now arranged four LNG cargoes for both May and June on top of 7-8 long-term cargoes from Qatar besides five furnace oil cargoes to address fuel crises. He said the two hour loadshedding was also being observed to conserve some fuel stocks for upcoming peak June demand when temperatures would be even higher and also to contain rising tariffs and circular debt that now stood at Rs2.460 trillion against Rs1.12tr in June 2018.

He said he had an initial virtual meeting with IMF mission to assure that power, petroleum and finance divisions were working in close coordination with the support of the broad-based political government which was not only competent in reaching required decisions on complex financial and energy issues but also serious to tackle challenges.

Dr Malik said the former PTI ministers were raising questions as if they were in opposition and to which they themselves were answerable for being in government for last four years and not been able to arrange LNG, coal or furnace oil.