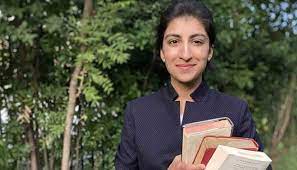 WASHINGTON: A Pakistani-American, Lina Khan named by US President Joe Biden to lead the Federal Trade Commission (FTC), giving the regulatory authority's top spot to one of the most prominent Big Tech critics.

The move, to elevate Ms. Khan to one of the most powerful regulatory positions in Washington, was announced by Senator Amy Klobuchar, a Democrat, at the start of a hearing on Tuesday. It came shortly after the Senate confirmed Ms. Khan as a commissioner in a 69-28 bipartisan vote.

Democrats will now have a majority on the five-member commission, which Ms. Khan likely will steer toward more aggressive examination of tech companies’ alleged abuse of monopoly power, according to experts.

Elizabeth Warren, who belongs to the progressive wing of the Democratic Party, said that Ms. Khan leading the FTC is “tremendous news,” saying in a statement that “giant tech companies like Google, Apple, Facebook and Amazon deserve the growing scrutiny they are facing and consolidation is choking off competition across American industries.”

Biden’s decision caps an unusually rapid ascent for Ms. Khan, the New York Times pointed out. She was born in London to Pakistani parents, who emigrated to the United States when she was 11. She first rose to prominence while a law student at Yale, where she wrote a paper laying out how modern antitrust laws had failed to check the power of Amazon.

Ms. Khan, 32, was sworn in on Tuesday, making her the youngest chairperson in the FTC’s history. “I look forward to working with my colleagues to protect the public from corporate abuse,” she said in a statement.

Ms. Khan signaled at her April confirmation hearing that she intends to carry her concerns about the tech giants into her role at the agency. She told lawmakers she saw a ‘whole range of potential risks’ around the tech companies. “One that comes up across the board is that the ability to dominate one market gives companies, in some instances, the ability to expand into adjacent markets,” she said. She also said regulators should apply more scrutiny to mergers involving the companies.

Amazon, Google and Facebook declined to comment on Biden’s unexpected decision, the Times said. Apple did not respond to a request for comment. The paper attracted notice from policymakers, other lawyers and the press. Her appointment was also hailed by many Democratic lawmakers. Senator Amy Klobuchar, Chairwoman of a Senate subcommittee overseeing antitrust and a regular critic of the tech industry, said Ms. Khan’s ‘deep understanding of competition policy will be vital as we strengthen antitrust enforcement.” Ms. Klobuchar noted Ms. Khan’s new role in an afternoon hearing on competition, before any announcement from the White House. “We need all hands on deck as we take on some of the biggest monopolies in the world,” she said.