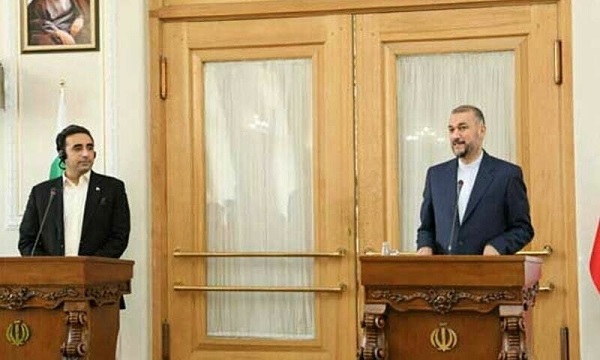 Moreover, Iranian Foreign Minister Hossein Amir-Abdollahian, while speaking during a joint press conference with Mr Bhutto-Zardari, said Iran still believes that negotiations can succeed in reviving the 2015 nuclear deal, despite a recent rebuke from the UN nuclear watchdog.

“Iran is a very important neighbour of Pakistan, one with which we share immutable historic and fraternal bonds,” said Mr Bhutto-Zardari. “For the prime minister and for me, building close relations with Iran remains a high priority,” he added.

The foreign minister, who reached the Iranian capital earlier in the day on a two-day visit at the invitation of Dr Amir-Abdollahian, said that during their consultations they took stock of the entire gamut of bilateral relations.

The foreign minister said he conveyed a message of goodwill and cordiality to Iranian brothers and sisters, adding that he was glad that they have come closer to resolving one of the major obstacles in expansion of bilateral trade through operationalising barter trade mechanism.

Mr Bhutto-Zardari said that another significant step towards improving bilateral relations was the commitment to strengthen energy cooperation through import of additional electricity from Iran.

He said that the two sides also discussed possibility of exchange of prisoners under the existing legal framework to allow them to complete their sentences in their respective countries.

“We appreciate Iran’s hospitality to receive and facilitate Pakistani pilgrims visiting Iran and have held useful discussions on creating additional facilities for zaireen,” he added.

The foreign minister said they discussed the latest developments in Afghanistan, especially the dire humanitarian situation and economic fragility.

He said that Pakistan and Iran were directly affected by conflict and instability in Afghanistan, and that they had vested interest in a peaceful, stable and prosperous Afghanistan.

From the Afghan authorities, the world expects a move towards inclusivity and effective counterterrorism action, he added.

The foreign minister said he also briefed his Iranian counterpart on the serious situation of human rights in Indian-held Jammu and Kashmir.

We are grateful for Iranian leadership’s steadfast support for the just cause of Jammu and Kashmir, he added.

The derogatory remarks made by BJP officials in India have deeply offended Muslims across the world. It is time for international community to show a common resolve against xenophobia, intolerance and incitement to violence on the basis of religion or belief, he maintained.