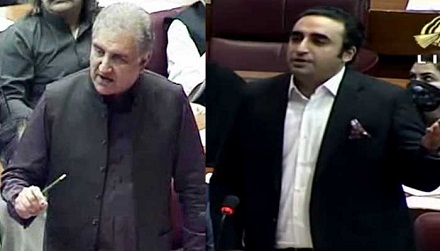 In his speech, Bilawal claimed that the government "rigged" yesterday's vote on the federal budget. The PPP chairman said that according to the rules, the NA speaker was obligated to carry out a count when a voice vote was challenged and it was not a matter of his "choice".

He said the final vote on the budget was what really mattered and that some treasury members had exhibited "irresponsible behaviour" at the time, lamenting the fact that members from the opposition benches were also missing.

"If you had carried out the count, we would've at least brought our stance on record. I stood up at the time of the last vote and challenged your ruling, but you stood up and left," Bilawal said, addressing National Assembly Speaker Asad Qaiser.

As a result, the budget's legitimacy was undermined, he said.

"Is it not rigging if we can't record our vote during the budget debate or during the Financial Action Task Force (FATF) debate. Is this not against the rules," he questioned.

A day earlier, the National Assembly had passed the budget for the new fiscal year with majority vote amid a dismal showing by the opposition.

A confident-looking Prime Minister Imran Khan had attended the proceedings for only 50 minutes and left the assembly hall even before final vote on the budget after realising that his presence was no more required in the house to ensure the presence of the treasury members who had clearly outnumbered the opposition.

The prime minister had entered the assembly hall at a time when the chair had already ordered a headcount on the demand of the opposition on the motion moved by Finance Minister Shaukat Tarin to take up the finance bill for consideration and final vote. The motion was approved with 172-138 votes.

When the budget was put for approval through voice vote, almost all the PML-N members had left the house leaving behind the PPP and Jamiat Ulema-i-Islam members. However, Bilawal had later claimed that when he challenged a voice vote on an important occasion, the speaker had violated the rules and deprived him of his right.

FM Qureshi responds to Bilawal
Responding to Bilawal, the foreign minister lashed out at the PPP chairman for levelling allegations of violating parliamentary tradition. "What are you talking about? In Sindh, where you have the government, you did not allow the opposition leader to speak," he said.

He stated that the speaker is the custodian of the house and his character had been "targeted" by the opposition. "You can have reservations about the speaker's decision, but you take it up in his chamber. You don't confront them on the floor of the house," he said.

The minister also questioned the basis on which Bilawal had challenged the legitimacy of the budget. "In Sindh, the opposition is not being allowed to speak," he said, referring to the barring of at least eight opposition lawmakers from the Sindh Assembly.

"The leader of the opposition wasn't present during the debate on the finance bill while 25 PML-N members were missing," he said. He stated that the opposition would not be able to suppress the government by making noise, holding the former responsible for spoiling the atmosphere of the lower house.

"The extent to which we know the learned member from Multan, you don't," the PPP leader said while referring to Qureshi. He added that Prime Minister Imran had "yet to find out what kind of a person he (Qureshi) is".

After interruption from the treasury benches, Bilawal insisted that he be allowed to speak, "otherwise I am here, let Imran Khan come here and do his speech. I will see how he is able to do it."

Bilawal said Prime Minister Imran should be advised to "see through" Qureshi, adding that he had known the foreign minister since his childhood.

"I have heard him say jiye Bhutto and agli bari, phir Zardari to protect his ministry," he said. "You wait and see what he does with your prime minister."

He also questioned Qureshi's role as foreign minister, holding him responsible for being involved in making alleged deals on Kashmir.

"When the United States is withdrawing from Afghanistan, he should be focusing on arranging a phone call with President Joe Biden due to Pakistan's strategic importance. It is a matter of shame that our premier doesn't even get a phone call," he said.

He said that the Sindh Assembly speaker had banned opposition lawmakers for creating a ruckus. "The Pakistan resolution was passed from the Sindh Assembly," he said, adding that the opposition had not presented a single cut motion during provincial budget proceedings. "This shows you their seriousness."

"The prime minister should tell the Inter-Services Intelligence (ISI) to tap Qureshi's phone. When he was the foreign minister during the PPP's government, he used to campaign in the world asking to make him premier instead of Yousuf Raza Gilani," he said.

Bilawal claimed that he was "bringing the truth forward", saying Qureshi was dismissed as the foreign minister for his campaign to get the prime ministership.

Taking the floor once again to respond to Bilawal, Qureshi said if the PPP chairperson knew him well, he too had known Bilawal since he was a baby.

"I have known him since he used to stand in the corner and get scoldings. I know him as well as his baba," he said, adding that he was sitting in the parliament after having beaten PPP candidates in the elections of 2013 and 2018.

He said the PPP leadership tended to make the "child" (Bilawal) read out from pre-written scripts and he got "switched on and off" on auto.

The foreign minister said it would take some time before Bilawal learned politics.

"He mentioned Gilani. At least they shouldn't have made him the opposition leader [in the Senate] through muk muka (covert deal).

"Gilani is the leader of the opposition today through government votes. Do some soul-searching, Bilawal, you will see the reality," he added.

"The child got upset today," Qureshi remarked while referring to Bilawal. "I will not add to his worries and will let it pass."