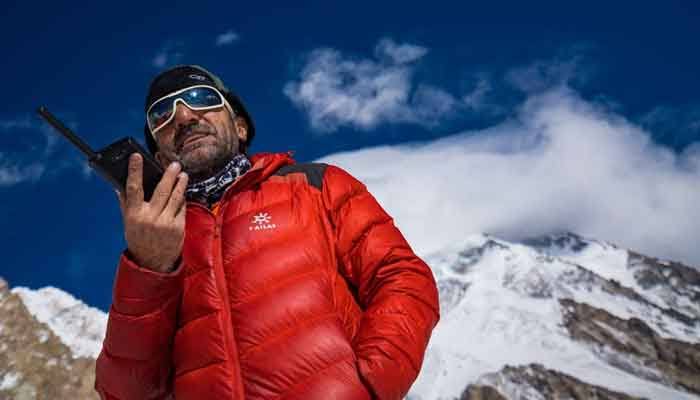 Sajid Sadpara, along with Canadian filmmaker Elia Saikaly and Pasang Kaji Sherpa, is summitting the K2 to find the bodies of his father and his companions Snorri, and Mohr. The mountaineers had gone missing on February 5 and were declared dead a few days later after their bodies were not found and the rescue mission was called off.

The team had reached Camp 4 this morning and flew a drone around the area in search of the bodies, sources said.

Through the drone, the team was able to detect a body above Camp 4 near the bottleneck.

A message fromSaikaly said that Sajid Sadpara has buriedJuan Pablo and that his father's body is located above the bottleneck.

"Sajid just buried Juan Pablo. His father Ali is just above the bottleneck. We will go up again tonight," said the Canadian filmmaker at 6:59pm.

A minute later, Saikaly sent an SOS message for more oxygen as the team was running low on it.

"If anyone can help us get more oxygen, anyone from Pakistan with influence, people at Base Camp leaving, we could use your help. Running low," said the Canadian. He added that the team is currently at Camp 4.

A screengrab of the SOS message posted on Canadian filmmaker Elia Saikaly's website.

Earlier, the GB information minister told Geo News that the team had located the first body at close to 9am this morning near the bottleneck area of the mountain.

“First, the body of John Snorri was located at 9am below the bottleneck. He was wearing yellow and black coloured clothes,” said Khan. He added that the second body was located at 12pm but they have not been able to identify the other two bodies The minister said that Snorri’s body was identified as the army’s focal person had confirmed the colours of his clothes.

Khan said that the army helicopters are on stand by for the rescue mission and that the digging process to recover the bodies is underway right now. He added that the army and the government are on alert.

The last Instagram update made by Saikaly two days back saying that they had begun their "final search and summit attempt".

Last month, famed mountaineer Ali Sadpara’s son Sajid had announced that he will be summiting the K2 once again to make a documentary on his father and also to locate his dead body.

“I want to go to K2 to know what happened to my father and John Snorri,” said Sajid in a press conference as he announced his plans to start climbing the world’s second-tallest mountain from tomorrow.

“A documentary on the life of Jon Snorri and Ali Sadpara is in the making. [I hope] go to K2 to search [the dead body] and make a documentary,” said Sajid, adding that it may take him and his team 40 to 45 days to summit the peak.

Ali Sadpara, Iceland's John Snorri and Chile's Juan Pablo Mohr had departed for their journey to scale the K2 on February 3 after Sadpara's birthday, asking fans and admirers to "keep us in your prayers".

They had started their attempt for the final summit in the early hours of February 5, hoping to accomplish the herculean feat by afternoon.

Back then, a thorough search was carried out by the Pakistan Army for the mountaineer and his companions but the expedition was not found and hence, Sadpara's family had declared him dead.

"I will keep my father’s mission alive and fulfil his dream," Sajid Sadpara had said.