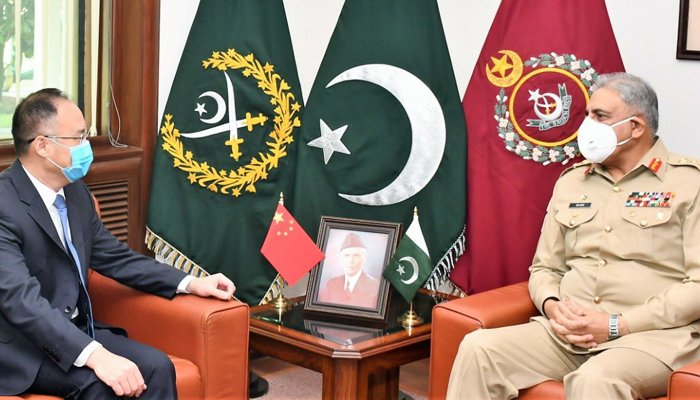 During his visit, Mr Khan will attend the opening ceremony of the 2022 Winter Olympics in Beijing and hold talks with senior Chinese leaders on bilateral relations.

China’s security concerns were accentuated by two major attacks last year, including the bomb attack on a Chinese workers’ bus near the Dasu hydropower plant in July and the attack on a hotel in Quetta in April where the Chinese envoy had been staying during a trip to the provincial capital.

Meanwhile, Islamabad has agreed to compensate the Chinese workers killed and injured in the Dasu attack and various plans are being drawn for making the payment.

During the meeting with the Chinese ambassador, Gen Bajwa reaffirmed Pakistan’s commitment to providing full security to Chinese projects and citizens working in the country.

The Chinese envoy thanked Gen Bajwa for “for special measures taken for the provision of safe and secure environment to CPEC projects in Pakistan”, the ISPR said.

The ISPR said Mr Rong was satisfied with the “progress on CPEC and reaffirmed the need for timely completion of the remaining projects.” Regional security, especially in Afghanistan’s context, was also discussed during the meeting.

Gen Bajwa told the ambassador that Pakistan remained committed to cooperating with its international partners for bringing peace to the region.