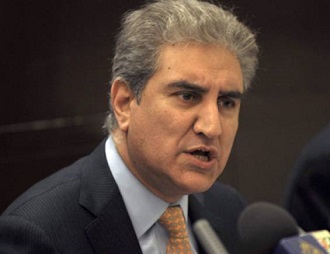 ISLAMABAD: Foreign Minister Shah Mehmood Qureshi on Wednesday told his counterparts from the Shanghai Cooperation Organisation (SCO) that the new coronavirus was not growing exponentially in Pakistan, but economic challenge was grave.

“Although the number of infections is rising, with increased testing, we have not seen explosive rise in cases, and the number of fatalities have remained limited,” Mr Qureshi said while participating in the SCO Council of Foreign Ministers (CFM) video-conference convened by the Russian Federation.

The meeting was attended by the foreign ministers of member states, SCO Secretary General Vladimir Norov and Director of the Executive Committee of the SCO Regional Anti-Terrorist Structure Jumakhon Giyosov.

The foreign minister, however, was worried about the economic impact of the pandemic. “Perhaps graver than the health challenge, is the economic challenge that the developing countries face,” he said

Pakistan has over the past few weeks carried out an extensive diplomatic outreach to highlight the crisis being encountered by fragile economies.

Prime Minister Imran Khan had on April 12 launched an international appeal for debt relief. He had urged the world leaders to help developing countries in dealing with the impact of Covid-19 through debt relief and restructuring so that fiscal space could be created for them to carry out relief activities in their countries.

Although various global initiatives have been announced since then for mitigating the economic impact of the pandemic, Pakistan believes that rich countries need to do more. In this regard, Pakistan is trying to initiate consultations at the United Nations over a comprehensive solution to the debt challenges of developing countries against the backdrop of Covid-19.

Mr Qureshi told the SCO meeting that Prime Minister Khan’s initiative aims at a comprehensive plan of action of debt relief and restructuring to free up resources, shore up economies and promote sustainable growth.

Calling for collective efforts by the countries in the bloc against Covid-19, the foreign minister said the SCO has the wherewithal to defeat the infectious disease, but “unity and a sense of purpose” were needed. “SCO’s role in coordinating our response to collectively confront this challenge will be crucial, going forward,” he stressed.