CPEC to go ahead despite impact of Covid-19 pandemic: Shah Mahmood Qureshi 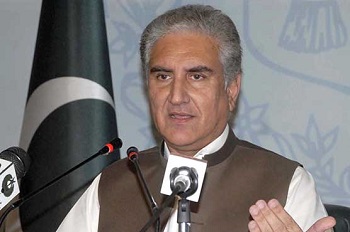 BEIJING: The China Pakistan Economic Corridor (CPEC) would go ahead despite impact of the Covid-19 pandemic, as two countries are committed to the scheduled construction plan, said Foreign Minister Shah Mahmood Qureshi.

Talking to the Global Times here, Qureshi said, "I don't think it'll have an impact on the CPEC in the long run. But in the short run, yes, there could be a slight slowdown. As soon as we are over the hump of dealing with the coronavirus, I think we'll be back on track.

"Qureshi's comments came as President Arif Alvi this week visited China to show solidarity between the two "iron brothers" amid fears over the spread of the novel coronavirus worldwide. The CPEC, a flagship project under the China-proposed Belt and Road Initiative, is a phased mega-project that consists of many projects in different fields including energy and transportation.

Since the projects were launched, speculations from some countries have followed, the latest being that existing projects could be curtailed due to the impact of the virus.

However, Qureshi dismissed those claims, saying all projects were being carried out in phases. In the first phase, projects mainly focus on industrialization preparation work, for example developing infrastructure to meet energy requirements in Pakistan, according to the foreign minister.

"I don't think there will be any curtailment. What could happen is that we could review the progress and see the capacity limitations that we have and adjust the base of our work accordingly," he noted.

Qureshi said that cooperation in other fields is also on the agenda during the visit, including "setting up a working group on agriculture to see how China can help Pakistan improve its agricultural productivity, and working together in the fields of science and technology.

"Overall, Qureshi said he is confident the CPEC projects between China and Pakistan - two all-weather strategic partners - will march forward and eventually benefit the whole region.