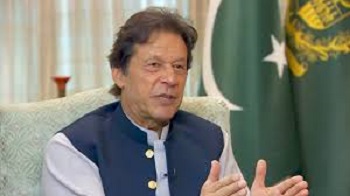 ISLAMABAD: Prime Minister Imran Khan said on Tuesday imposition of a curfew would be the last option to prevent the spread of coronavirus and that in such a situation he would first form a team of volunteers to supply food items to people, especially the poor and those belonging to low-income groups, on their doorstep.

Speaking to senior journalists and TV anchor persons at the Prime Minister Office, he rejected the perception that a delayed response by the government caused the spread of Covid-19 in the country. He claimed that the Pakistan government had done better than any other governments in the world to deal with the coronavirus pandemic.

Sticking to his previous stance that a curfew-like situation would adversely impact the poor and daily wage workers, PM Khan said there were stages of a lockdown and a curfew would be its last stage.

A lockdown was announced when there were only 21 confirmed cases of Covid-10 in the country by closing down all educational institutions and banning public gatherings, he said. What option would be left when even a curfew would fail in stopping the spread of coronavirus, he asked from journalists who were insisting for imposition of a curfew.

He said the economic conditions of Pakistan were not similar to those of Italy and other European countries where people were provided all necessary items during the curfew.

Answering a question about the Sindh government’s decision of announcing a lockdown in the province, he said after 18th Amendment in the Constitution, provinces were independent for taking such decisions.

The prime minister called upon overseas Pakistanis to play their due role in this difficult time and provide funds to the government for the fight against coronavirus.

Answering a question about inadequate arrangements for Pakistani pilgrims who returned from Iran, and reportedly caused the spread of coronavirus in the country, he said it was very difficult to confine the pilgrims at quarantine centres set up at the borders. “The area of Taftan is 700km away from Quetta. Makeshift quarantine centres were established at the borders with the help of the army and our health minister had stayed in Taftan for the purpose,” he added.

PM Khan said nobody knew for how long this situation would continue, expressing the fear that it could prolong for six months. Only time will tell whether steps being taken by his government are appropriate or not.

About holding of religious congregations despite a ban, PM Khan said the government had mobilised Ulema to guide the people to avoid mass gatherings and follow precautionary measures.

Talking about freedom of press, the prime minister said he fully believed in the freedom of press. But, he added, accuracy and objectivity should be the hallmark of journalists. The role of media was to counter panic in society as it was more dangerous than coronavirus.