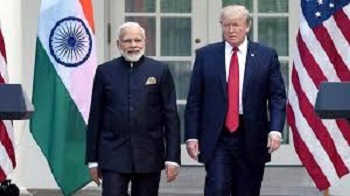 WASHINGTON: US President Donald Trump and first lady Melania Trump will visit India on February 24-25 and travel to New Delhi and Ahmedabad, the White House said on Monday.

The latter city is the largest in Prime Minister Narendra Modi’s home state of Gujarat and played an important role in Mahatma Gandhi’s life and leadership of the Indian independence movement.

Press secretary Stephanie Grisham said Trump and Modi spoke by telephone over the weekend, and agreed the trip would strengthen the strategic partnership between the two counties and highlight the strong bonds between the American and Indian people.

The leaders have developed a warm relationship over the past few years.

During their first White House meeting in June 2017, Modi bear-hugged Trump several times following a joint news conference in the Rose Garden. Last September, Trump traveled to Houston to speak at a rally for Modi before an audience of 50,000 Indian Americans.