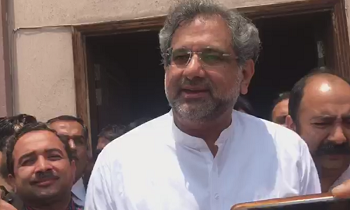 ISLAMABAD: The Executive Board Meeting (EBM) of National Accountability Bureau (NAB) was held at NAB Headquarters in which NAB EBM authorised approval of filing of three corruption references against various accused persons including former Minister for Petroleum Shahid Khaqan Abbasi for inflicting Rs 138.96 million to the national exchequer.

Chairman NAB Justice Javed Iqbal said that eradication of corruption and recovery of looted money from corrupt elements in the top most property of NAB. NAB’s faith is corruption free Pakistan. NAB during the tenure of present management of NAB has recovered Rs. 178 billion from corrupt directly and indirectly. The performance of NAB has approached by Transparency International, World Economic Forum and PILDAT. He directed all DGs of NAB to conduct complaint verifications, inquiries and investigations within the prescribed time of 10 months. He further directed all investigation officers and prosecutors to appear with full preparation in the respected Accountability courts on the basis of solid evidence and pursue all NAB cases as per law. He said that NAB’s overall conviction ratio in the Accountability courts in about 70 percent. He said that NAB has arrested 45 accused persons in Modarba cases and their references are under trial in the respected Accountability courts.

The EBM approved closing inquiry against Rehman Medical College, Peshawar and others owing to absence of evidence.