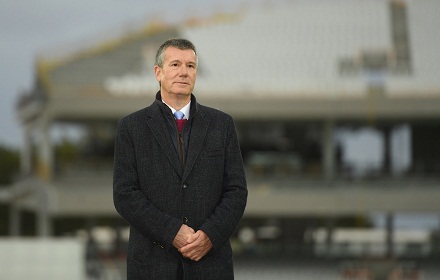 LONDON/ISLAMABAD: The England and Wales Cricket Board announced on Thursday that chairman Ian Watmore was stepping down with immediate effect, following criticism of the decision to cancel a tour of Pakistan.

Watmore, 63, has a reached a "mutual agreement" with the board to leave his role following the end of the domestic season after just over a year in the role. He served as the chairman for only 13 months, despite having been appointed for a five-year term.

His position, normally held for a five-year-term, had come under scrutiny following the move to scrap the Pakistan trip, involving England’s men’s and women’s teams. He has been under increasing pressure since making the decision to cancel England’s tour to Pakistan, which was scheduled for later this month. That only increased after what was described to The Times as a “shambles of a meeting” with county chairmen and chief executives on September 29.

"It is with regret that I step down as chair of the ECB, but I do so in mindfulness of my own wellbeing and that of the game which I love," said Watmore.

"I was appointed to the post in a pre-pandemic era, but COVID has meant the role and its demands on time are dramatically different to all our original expectations, which has taken a personal toll on me.

"Given this, the board and I feel the ECB will be better served by a new chair to take it forward post pandemic." England's men and women teams were due to play two Twenty20s in Rawalpindi on October 13 and 14. The women's team were also due to play three ODIs in Pakistan on October 17, 19, and 21.

Pakistan Cricket Board (PCB) Chairman Ramiz Raja during his briefing to the Senate Standing Committee on Inter-Provincial Coordination (IPC) here, meanwhile, said that New Zealand are ready to retake tour to Pakistan for the limited-overs series following an unprecedented pressure they faced from all around on the illogical pullout.

In an in-depth briefing on the impending cricketing challenges, the PCB chairman revealed that NZ Cricket has expressed its willingness to take the tour again. “The NZ Cricket has expressed its willingness to resend their team to Pakistan, the official decision is expected to be communicated within the next few days. When can we accommodate them? Is a question to which we would be having an answer after getting the full picture from the NZ Board,” he told the committee.

The PCB chief meanwhile, issued an apology for "erroneously" tweeting about his English counterpart's resignation from his office. "The earlier tweet was erroneously put on my Twitter account. Apologies," Raja said. In his earlier tweet, Ramiz wrote: “Breaking: ECB chief has resigned.”