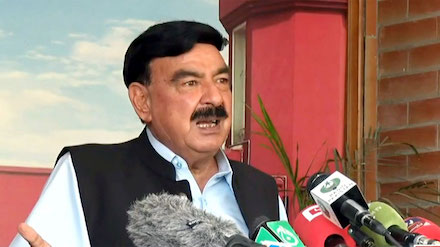 ISLAMABAD: Even Interior Minister Sheikh Rashid Ahmed demanded that electricity charges should be reduced and steps must be taken to reduce price hike. Taking part in a general discussion on the federal budget in the National Assembly, the lawmakers on both sides of the aisle on Saturday joined their voices by castigating the government for “neglecting” the agriculture sector and asked it to announce a comprehensive agriculture policy.

Most of the members made rhetoric and political speeches as the opposition members termed the budget a “fraud with the people of Pakistan” and the treasury members dubbed it “the best and growth-oriented budget” in the present scenario amid Covid-19 pandemic.

Besides taking their own government to task over poor allocation for the agriculture sector, some treasury members also expressed concern over law and order situation, electricity loadshedding and price hike in the country.

In their speeches, the members mostly talked about the issues of their constituencies and criticised the performance of each other’s governments in the provinces.

The opposition members belonging to Khyber Pakhtunkhwa and Balochistan lashed out at the governments of the two provinces whereas the Pakistan Tehreek-i-Insaf (PTI) members, mostly from Karachi, criticised the performance of the Pakistan Peoples Party (PPP) government in Sindh.

The Pakistan Muslim League-Nawaz’s Bashir Virk regretted that except Yaseen Wattoo in 1980s, no person affiliated to agriculture sector had become the country’s finance minister. He said Mr Wattoo had eliminated power theft by fixing tariff for tube-wells.

“This is the house of agriculturists. But we make decisions after taking dictation from bureaucrats and technocrats,” he said.

PTI MNA from Multan Rana Qasim Noon endorsed Mr Virk’s views and said Rs12bn allocation for agriculture in the budget was insufficient. He called for imposing “agriculture emergency” in the country.

“Regrettably the government has done nothing for agriculture. The nation is awaiting an agricultural policy,” Mr Noon said. Speaker Asad Qaiser had formed a committee on agriculture, but there was no outcome, he said.

“The policy makers are requested to please abandon anti-farmer policies. Enmity with the farmer means enmity with Pakistan,” he added.

Mr Noon said the farmers were not given loans and they had now stopped cultivating cotton. He also called for increasing the budget for health and education and said there must be the trickle-down effect of the budget on the masses.

The PML-N’s Nadeem Abbas said the government’s policies would force the farmers to commit suicide.

Khurram Dastagir of the PML-N said what kind of bumper crop of wheat the country had produced when flour price was going up and up and the government was now planning to import wheat. He alleged that wheat was being smuggled out of the country, saying the government was a “combination of incompetence and mafias.”

“The government claims that we have bumper crop of sugarcane but the price of sugar is constantly increasing,” he added.

The PPP’s Hassan Tariq regretted that no subsidy had been announced for seeds and fertilisers.

The most hard-hitting speech was delivered by the ruling PTI member from Rajanpur, Riaz Mazari, against his own party’s federal government and provincial government in Punjab. He said poor people had been “crushed” under price hike, adding that either it was because of the previous governments or because the incumbent government had no capacity to resolve the issue.

“I will request the government to bring down price hike,” he said.

Mr Mazari said that his constituency had become a “no-go area” as though five IGs of Punjab police had been changed, the robbers were still roaming the area freely. He said a number of operations had been conducted in the area, but without any result. He said even the Rangers had conducted an operation, but the people of the area were still at the mercy of the robbers.

Mr Mazari said he had taken up the issue with Prime Minister Imran Khan and Punjab Chief Minister Usman Buzdar in the presence of the inspector general of police, but to no avail. He said the IG was even unable to provide information about the arrest and killing of robbers.

“There is no writ of government in the area,” he said. “Feeling insecure, the people have started migrating from the area.”

He then made a very interesting suggestion, that the money to be spent on operations should be given to the robbers so that they did not loot the people.

PTI MNA from Charsadda Fazal Mohammad Khan blasted his own party’s government in KP, saying the local officials had issued him completion certificates of 10 development projects in his constituency, but on ground only three projects had been completed.

“Where has the construction material of these projects gone?” he asked.

Mr Khan said the government had announced setting up of a medical college and a cadet college in his constituency but no funds had been allocated for them.

PTI MNA from Peshawar Arbab Sher Ali asked the government to take notice of the sit-in by the people in Janikhel area, saying that “these are faultlines.”