Family united after 74 yrs in Kartarpur 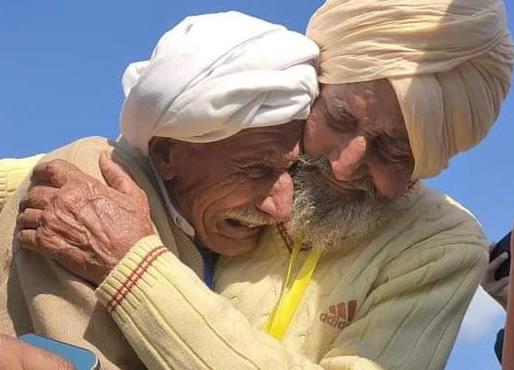 NAROWAL: The Kartarpur Corridor provided the two branches of the family with an opportunity to reunite after 74 years as they came to know about each other through a Punjabi news channel.

The members of the family were so overwhelmed that they hugged each other and cried.

Shahid Rafiq Mithu said that their elder Iqbal Masih had migrated to Pakistan with his family during the Partition in 1947, while his (Iqbal’s) brother Inayat got lost during the tumult and was left behind in east Punjab.

“Around a year ago my interview was aired by a Punjabi news channel in which I talked about the separation of our elders during the Partition, which was watched by our relatives in Indian Punjab, who contacted us and we planned reunion at Kartarpur,” Shahid Mithu said, regretting that both the elders — Iqbal and Inayat — had died.

‘I am very happy after meeting Shahid Rafiq Mithu and 35 other relatives at Kartarpur,” Sono Mithu said.

The reunited relatives had heart-to-heart chat and shared with each other their stories and memories of their late elders.

On the occasion, the Kartarpur administration served sweets to both families.

Later, the family members visited different parts of Gurdwara Darbar Sahib and had lunch together at the Baba Guru Nanak Langar Hall. They also visited a local market for shopping and kept chatting.

They planned to meet again and the Sono’s family was asked by their relative here to bring more members during their next visit to the Gurdwara.