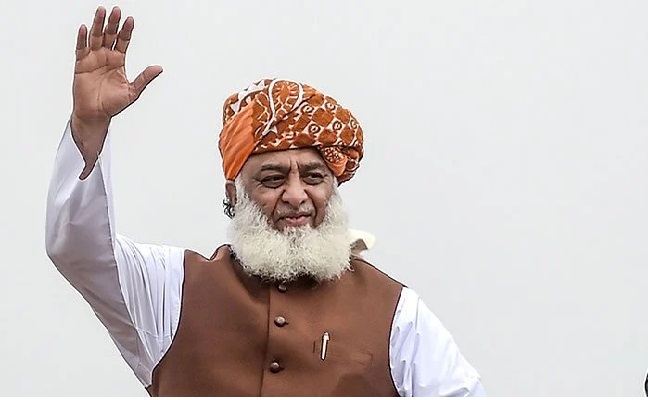 KARACHI: Fazlur Rehman the president of the alliance of the ruling parties, Pakistan Democratic Movement (PDM), and chief of his own faction of the Jamiat Ulema-i-Islam, Maulana  on Thursday sought consensual decision of the allies parties for the next general elections in the country. But, he put his weight behind the suggestion of former president Asif Ali Zardari, who called for the polls only after electoral reforms and amendments to accountability laws.

After addressing a “Meet the Press” at the Karachi Press Club (KPC), the Maulana was confident while responding to a volley of questions from journalists about the performance of the coalition government that had “failed to bring any economic strategy” despite tall claims before ouster of the Imran Khan’s government, saying “things would take time to settle down” and it would be too early to “come up with a verdict against the new government”.

Calling them personal views, he also shared a sketchy roadmap of the future governance suggesting new terms of engagement with the International Monetary Fund (IMF), cordial policy with the international community and steps to build the confidence of the developed world in Pakistan which was “ruined” by the Pakistan Tehreek-i-Insaf (PTI) government.

“First thing we should demand before deciding its schedule is that the elections should be held free and fair,” he replied to a question about his opinion on the next polls. “That would be the decision of the all parties and every stakeholder should agree on its timeline and schedule. But it’s my opinion that the elections should only be held after electoral reforms and then fixing the accountability laws. We all know that NAB [National Accountability Bureau] during last three years was turned into an institution of vendetta. The flaws which led to all such mess should be addressed before next election.”

His views came a day after the former president Zardari had categorically ruled out the possibility of early elections, saying it was a joint decision of the coalition government to go for polls only after electoral reforms and amendments to election laws were completed. The views of two key leaders of the ruling coalition emerged a different piece of thought shared by Defence Minister Khawaja Asif, who had hinted at the possibility of holding general elections even before the next army chief is to be appointed in November. However, he had to walk back his comments within hours of his interview to BBC Urdu.

When the Maulana at the KPC was asked about credibility of the criticism of ruling parties against PTI for “abusing the armed forces” when they were questioned for the same tone against the “institutions” when they were in the opposition, he ruled out any such narrative built by his party or those in the PDM and it was only Imran Khan which had defied all political and democratic norms in the politics.

“When any of us called the institutions Janwar [animal],” he questioned in reply to a query. “When we called our commander of armed forces in chief Mir Jaffar [traitor]? We did criticise the institutions for their role in the politics but we never abused any individual or the institution. It’s Imran Khan who came up with this tradition of abuses and insults. Criticising someone is one thing and abusing someone is another.”