Federer all pumped up for ninth Wimbledon win 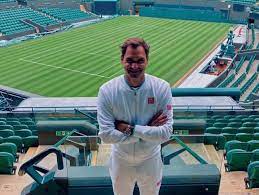 LONDON: Roger Federer says he is ‘excited’ and ‘pumped up’ as he targets a ninth Wimbledon title — a far cry from the disgruntled figure who exited Halle in the second round earlier this month.

The 39-year-old Swiss accepted the manner of his 4-6, 6-3, 6-2 defeat by Felix Auger-Aliassime both on and off the court had fallen short of the high standards he has set over the past two decades.

“I mean, I had a mental moment where I was just, you know, not happy with how things were going in the match,” Federer said at his pre-Wimbledon press conference on Saturday. “I mean, that feeling when I started not liking — when things derail, let’s say, it was definitely also there’s ways to lose and a standard I set for myself how I go about things. “The good thing now looking back is I know it will not happen here because I’m ready, I’m excited and pumped up.”

Seeded six and with just eight tour matches under his belt this year he will face a tough first round opponent in France’s Adrian Mannarino, who has reached the Last 16 at Wimbledon on three occasions.

Federer, though, insists that having got used to the Wimbledon bubble — due to the coronavirus pandemic — both in the hotel and at the All England Club he is raring to go.

He had a hit out on the Wimbledon courts with two-time Wimbledon champion Andy Murray on Friday — something he said they had not done for the best part of 15 years.

He says he has taken whatever positives he can out of the Halle situation — a tournament he had won 10 times and used as his annual prep for Wimbledon.

“I think I got to take the positives out of these last few weeks that I’m actually here at Wimbledon right now and I have a chance,” he said. “I know if I get rolling, I get into the second week, which is the goal here right now, that I get stronger and stronger as every match goes by, I believe it’s very much possible.

“I come here feeling mentally strong rather with the last set I played in Halle, which was clearly not the standard I like.”

Federer has like great rivals Murray and to a lesser extent Rafael Nadal — both younger than him but already in their mid 30’s—- struggled with fitness issues.

He withdrew from the French Open — where he had been drawn in the same half as Novak Djokovic and Nadal — before his fourth round match.

This was to give himself extra rest after two operations on his right knee in 2020 and a year of rehab.

Federer says he is uncertain what his programme for the rest of the year will be as so much hangs on Wimbledon and how he performs.

He would love to go to the Olympics in Tokyo — unlike Murray and Nadal he has yet to win the singles title although he did take Olympic gold in the doubles in 2008 — but it is not a done deal.

“I wish I could tell you more,” he said. “In previous years it was definitely easier. At the moment things are not as simple as in the past. With age you have to be more selective. You can’t play it all.”

“My feeling is I would like to go to the Olympics,” Federer said. “I would like to play as many tournaments as possible. But I think we decided now let’s just get through Wimbledon, sit down as a team, and then decide where we go from there.”

Federer — who admitted he missed the routine of setting the family up in a house close to Wimbledon and seeing his children run around said the ageing process made it tougher to make such calls.