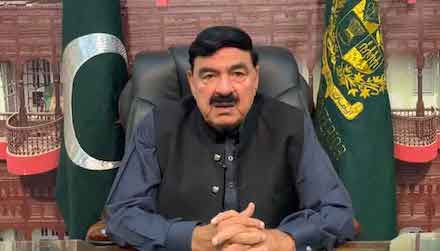 ISLAMABAD: Minister for Interior Sheikh Rashid Ahmed on Saturday informed the National Assembly that work on fencing of border with Afghanistan would be completed by the end of this month.

Taking part in a budget discussion in the House, the minister said 88 per cent work had been done so far and the rest would be completed by June 30.

Alluding towards the situation in Afghanistan in the context of US troop pullout, Mr Rashid noted that next two to three months were very important for Pakistan also. “Right now infighting is going on at some 38 locations in Afghanistan,” he said, explaining that as many as 2,400 Afghan personnel had joined the ranks of Taliban.

He urged all the political parties to keep their bitterness aside and sit together for electoral reforms. All political parties should evolve consensus on electoral reforms for transparent elections, he said. Parties should also discuss the evolving regional security situation, he said, adding that Gwadar had become very important and relationship as well as interest among the countries were changing.

He praised overseas Pakistanis for playing a pivotal role in putting the economy on the right track by sending record remittances of $9 billion.

He praised Prime Minister Imran Khan for initiating work on Dasu and Diamer-Basha dam projects, explaining that they would not only irrigate agricultural land but also provide cheap electricity.

About his ministry, Mr Rashid said: “We are introducing e-passports whilst online visas are now being issued.” He said the issuance of online exit permission would also start soon. He said passport could be obtained same day by depositing additional fee of Rs2,180. He said a backlog of 300,000 visas had been cleared during his tenure.

He also announced that National Database and Registration Authority (Nadra) offices would be opened in every tehsil headquarters to facilitate the people. He said the process would involve consultation with respective members of the National Assembly irrespective of their political affiliation. The MNAs would be able to select the place for Nadra offices and also guide the government in this regard, he added.

He said Mobile Registration Vans had started functioning in the erstwhile Fata where people including women and disabled persons were being served.