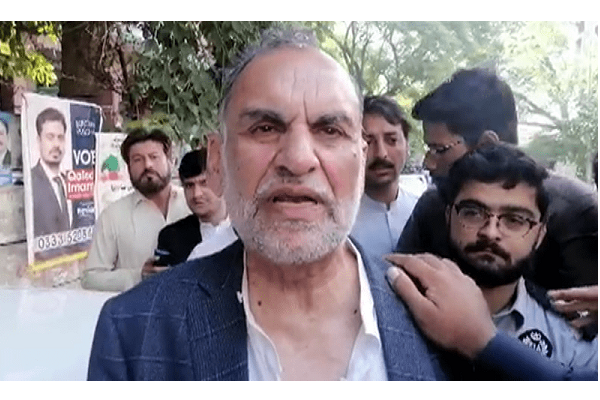 He was previously arrested by the FIA in October for a controversial tweet thought to be against the armed forces.

Since he was released on bail, the senator has maintained that he was allegedly tortured in custody and has demanded the removal of two military officials, one of whom he used foul language against in his tweet yesterday.

A first information (FIR) report was registered by the FIA on the complaint of the state through Islamabad Cyber Crime Reporting Centre (CCRC) Technical Assistant Aneesur Rehman.

The complaint was registered under Section 20 of the Prevention of Electronic Crime Act 2016 (Peca) which deals with offences against dignity of a person as well as Sections 131 (abetting mutiny or attempting to seduce a soldier from his duty),500 (punishment for defamation), 501 (defamation and printing of content deemed defamatory), Section 505 (statement conducing to public mischief) and 109 (abetment) of the Pakistan Penal Code (PPC).

According to the FIR, Swati and three other Twitter accounts — @Wolf1Ak, @HaqeeqatTV_20 and @Azaadi99 — “with malafide intentions and ulterior motives, started [a] highly obnoxious campaign of intimidating tweets […] against state institutions” and senior government functionaries, including outgoing army chief General Qamar Javed Bajwa.

It said that on Nov 26, Swati shared a tweet wherein he stated that he would go after a senior military official at every forum. It went on to say that on Nov 19, @Azaadi99 shared a tweet in which held generals responsible for the country’s destruction to which Swati replied with “thank you”.

Further, @Wolf1Ak on Nov 24 stated that “tabdeeli” had to begin by clearing the filth of the “corrupt generals” from the institution, to which Swati again replied with “thank you”.

The complaint said that on Nov 24 @HaqeeqatTV_20 tweeted about a word for those on their way out to which the senator responded with strong language.

The FIR said that such “intimidating tweets of blaming and naming” were a “mischievous act of subversion to create a rift between personnel of armed forces to harm the state of Pakistan”.

The FIR said that through the offensive tweets as well as the comments on instigating tweets, the accused attempted to seduce army personnel from their allegiance from their duties as subordinates,“ adding that this was a “calculated and repeated attempt” by Swati.

The FIR noted that a similar complaint had been filed against the senator in the past, adding that Swati attempted to “provoke” the general public and personnel of armed forces by trying to create “a feeling of ill-will among the pillars of the state”.

Swati “violated the privacy and intimated by using false information” which was likely to incite any officer, soldier, sailor or airman to mutiny or otherwise disregard or fail in his duty, the FIR said, adding that the remarks were also likely to cause “fear or alarm” in the public.

PTI’s Babar Awan represented Swati during the hearing, saying that the effects of the physical and mental torture on the senator still remained. He said that Swati’s life was also in danger while also arguing that the tweets in question did not fall within the provisions of the sections filed in the FIR.

He also contended that Swati’s statement under Section 164 of the Code of Criminal Procedure was not recorded. “Senator Swati was brutally tortured last time. He has still not recovered,” Awan said.

On the other hand, the investigating officer said that a “narrative was being prepared”. He noted that a similar case had been registered against Swati in the past.

After hearing the arguments, the judge granted the FIA two-day physical remand of Swati.

Another FIR was registered against Senator Swati in Balochistan’s Kuchlak town.

The report was lodged by a citizen named Aziz-ur-Rehman in the Kuchlak police station under section 20 of the Prevention of Electronic Crimes Act (PECA) 2016 and sections 131 (Abetting mutiny, or attempting to seduce a soldier, sailor or airman from his duty), 153 (Wantonly giving provocation with intent to cause riot), 504 (Intentional insult with intent to provoke breach of the peace), 500 (Punishment for defamation), 501 (Printing or engraving matter known to be defamatory), 505 (Statements conducing to public mischief) and 109 (Punishment of abetment if the act abetted committed In consequence and where no express provision is made for its punishment) of the Pakistan Penal Code.

It alleges that Swati used derogatory language and provoked the people against the army during his address at the long march in Rawalpindi.

The FIR claims that the PTI leader also used abusive language against the military on Twitter. The complainant requested in the report that an investigation should be carried out against the senator.

“Are we still living in Pakistan or moved to Indian-occupied Kashmir?” he asked.

Pemra bans Swati’s press conferences, speeches
Shortly after Swati’s arrest, the Pakistan Electronic Media and Regulatory Authority (Pemra) prohibited broadcast and rebroadcast of speeches/press conferences/media coverage of the senator, including as a guest at a talk show, statements or tickers, on all satellite TV channels with immediate effect.

The authority took the decision under Section 27(a) of the Pemra (Amendment) Act, 2007.

In the prohibition order, dated Nov 26, the authority referred to the speech made by Swati at the PTI’s long march in Rawalpindi the same day wherein he “made aspersions against the state institutions by leveling baseless allegations”.

The speech went on air “without any editorial control and effective utilisation of delay mechanism,” Pemra noted, adding that airing such content was a willful violation of its directives. The transcript of Swati’s speech from last night was also reproduced in the notification.

“In case of any violation observed, licence may be suspended under Section 30(3) of Pemra Ordinance 2002 as amended by Pemra (Amendment) Act 2007, without any showcause notice in the public interest along with other enabling provisions of law,” the order said.

PTI Chairman Imran Khan said he was “shocked and appalled at how rapidly we are descending into not just a banana republic but a fascist state”.

“How can anyone not understand the pain and suffering Senator Swati underwent with custodial torture, and blackmailing video of him and his conservative wife sent to his family?” he asked.

“His justifiable anger and frustration at the injustice meted out to him, especially the doors of the Supreme Court remaining closed to him despite over a fortnight of appeals by senators in support of him. So he tweets and is arrested again. Everyone must raise their voice against this state fascism,” Imran said.

PTI Secretary General Asad Umar said the dignified manner in which Swati conducted himself as he was arrested showed “he is fighting for a principle”.

“You can disagree with his choice of words or even his views, but you cannot disagree with him that whatever happens must [happen] within [the] ambit of [the] law,” he said.

Ex-human rights minister Mazari said Swati was arrested again by the Federal Investigation Agency (FIA) after addressing the party’s rally in Rawalpindi last night “where he asked some questions and spoke about what happened to him and his family”.

“Is that a crime? Did the pusillanimous Senate chairman again give his approval for this arrest? Fascism,” she said.

“Seems freedom of speech in Pakistan today is reserved for the powerful state, be it in a press conference, a public address, a press statement or on social media. For the rest, including parliamentarians, this right is denied,” Mazari said.