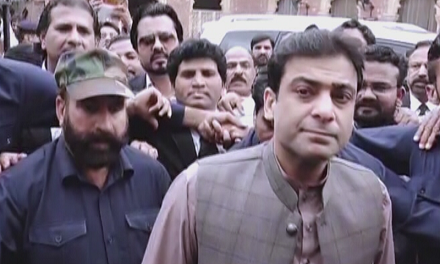 LAHORE: The Federal Investigation Agency (FIA) has resummoned Opposition Leader in Punjab Assembly Hamza Shehbaz in the sugar scam for Wednesday (tomorrow), asking him to bring all relevant records related to the case.

Earlier on June 24, Hamza had appeared before the FIA investigators but reportedly could not satisfy them in the Rs25bn money laundering charges against him and the members of his family (in the sugar scandal).

Last week, his father, PML-N president Shehbaz Sharif, had also appeared before the FIA in the same investigation and recorded his statement.

The PML-N Lahore chapter has directed its workers to reach the FIA building on the Temple Road on Wednesday morning to express solidarity with Hamza.

In his previous appearance, the PML-N leader had reportedly expressed his complete ignorance as to who had deposited large sums of money with his and sugar mills low cadre staff’s accounts.

Shahbaz Sharif and Hamza Sharif are on pre-arrest bail till July 10 in this case.

Hamza, who was released from jail in the money-laundering and income beyond means case three months ago after remaining behind the bars for 20 months.

The FIA had booked Hamza, his brother Suleman and his father Shehbaz under sections of the PPC, the Prevention of Corruption Act and Anti-Money Laundering Act in November 2020.