FIA wanted to arrest Shehbaz Sharif and his son 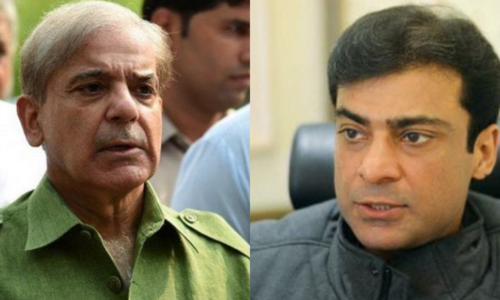 LAHORE: The counsel for the Federal Investigating Agency (FIA) confirmed to a special court in Lahore on Saturday that the agency wanted to arrest Prime Minister Shehbaz Sharif and his son, Punjab Chief Minister Hamza Shehbaz, in a Rs16 billion money laundering case.

The counsel's confirmation was in response to presiding judge of the Special Court (Central-I) Ijaz Hassan Awan's query on whether the FIA wanted to arrest the father-son duo in the case against them and their family.

The court also reissued the arrest warrants for suspects Salman Shehbaz, Tahir Naqvi and Malik Maqsood in the case.

Both PM Shehbaz and Hamza, whose interim was extended till June 4 at the previous hearing, appeared before the court today.

At the outset of the hearing, the FIA's counsel told the judge that half of the prosecution's team had been barred from reaching the courtroom by security, at which the relevant SP gave assurances that the FIA members stopped by the security would be allowed into the courtroom.

PM Shehbaz and Hamza's counsel, Mohammad Amjad Pervaiz, then began his arguments for the confirmation of Hamza's bail, saying that the case had been investigated for one-and-a-half year and yet no evidence was on record.

The counsel said it had been said a certain Mushtaq Cheeni had been included in the investigation, but he was neither made a witness nor a suspect.

He claimed that the FIA included Shehbaz and Hamza in the investigation while they were in jail and went on the allege that "state machinery was used to suppress opposition leaders in the previous tenure".

In response, the counsel for the FIA contended that the "suspects had not been included in the investigation". He did not elaborate whether he was referring to only Shehbaz or Hamza here.

Shehbaz and Hamza's lawyer argued back that the "suspects had been included in the investigation", and that "the FIA's lawyer is making a false statement".

Continuing his arguments, he said, "There was just one agenda to the previous government: to somehow put them (Shehbaz and Hamza) in jail".

He denied that Hamza had ever been a director or shareholder of the sugar mills named in the case.

Following that, Hamza and Shehbaz left after taking the court's permission.

The judge then observed that the prosecution had maintained that money was withdrawn from a certain Gulzar's account even after his death.

"Then there should be evidence that thsi money was deposited in Hamza Shehbaz's account," the Punjab CM's counsel Amjad Pervaiz contended.

The court then suspended the hearing, directing Pervaiz to present arguments on legal points after the break.

Before the suspension, the FIA's prosecutor said would present his arguments after the completion of Pervaiz's arguments.

When the hearing resumed, Pervaiz maintained that the suspects in the case had "never taken undue advantage of bail" they had been granted.

He argued that the FIA's investigation had been completed and an arrest could not be made at this stage.

"Shehbaz and Hamza had joined the FIA's probe," he reiterated, adding that the court had established that there had been a delay by the FIA in the filing of this case.

He said it was "an important legal point that the prosecutor prove the aspect of mala fide in this case".

"A challan has been submitted in the case and things are documented," the lawyer continued.

He further pointed out that the suspects were on bail for the past year.

"There are no complaints about the suspects' attendance at the hearings. Courts confirm bail only on these grounds," he said, adding that the Supreme Court had stated that it was not even necessary to prove mala fide in the case.

After the completion of his arguments, the court reissued the arrest warrants for suspects Salman Shehbaz, Tahir Naqvi and Malik Maqsood.

The court adjourned the hearing after extending Shehbaz and Hamza's interim bail till June 11.

The lawyers of other suspects are to present their arguments at the next hearing.

The FIA had in December 2021 submitted the challan against Shehbaz and Hamza to a special court for their alleged involvement in laundering an amount of Rs16bn in the sugar scam case.

"The investigation team has detected 28 benami accounts of the Shehbaz family through which money laundering of Rs16.3bn was committed during 2008-18. The FIA examined the money trail of 17,000 credit transactions," according to an FIA report submitted to the court.

The amount was kept in "hidden accounts" and given to Shehbaz in a personal capacity, the report added.

This amount (Rs16bn) has nothing to do with the sugar business (of the Shehbaz family), it claimed. The money received from the accounts of low-wage employees by Shehbaz was transferred outside Pakistan via hundi/hawala networks, ultimately destined for the beneficial use of his family members, the FIA had alleged.