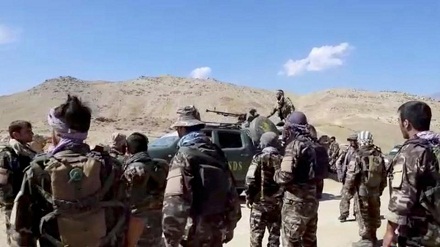 KABUL: As fighting between the Taliban and resistance forces continued on Saturday for control of Afghanistan’s Panjshir Valley, the announ­ce­ment of a new government by the Taliban has reportedly been delayed until next week.

Taliban sources earlier on Friday had claimed that the group had taken over the valley, triggering celebratory fire in capital Kabul that left 17 people dead and 41 others wounded.

While the resistance forces had already denied that the last province holding out against the Taliban had fallen, the Taliban also decided not to issue any public declaration about the ‘victory’.

The National Resistance Front (NRF) of Afghanistan, which groups opposition forces loyal to Ahmad Massoud, son of legendary anti-Taliban commander Ahmad Shah Massoud, said the Taliban forces had reached the Darband heights on the border between Kapisa province and Panjshir but were pushed back.

“The defence of the stronghold of Afghanistan is unbreakable,” NRF spokesman Fahim Dashty tweeted.

Panjshir, which held out for nearly a decade against the Soviet Union’s occupation and also the Taliban’s first rule from 1996-2001, is stubbornly holding out.

A Taliban source said fighting was continuing in Panjshir but the advance was slowed by landmines placed on the road to the provincial capital, Bazarak, and the provincial governor’s compound.

“Demining and offensives are both going on at the same time,” the source said.

Former vice president Amrullah Saleh holed out alongside Ahmad Massoud admitted NRF’s perilous position in Panjshir, which is walled off by mountains except for a narrow entrance.

Usually known for his sharp Western suits, Saleh was filmed wearing a traditional shalwar kameez tunic and a flat woollen pakol cap favoured by Panjshiris. “The situation is difficult, we have been under invasion,” Saleh said in a video message. “The resistance is continuing and will continue,” he added.

Taliban and resistance tweets suggested the key district of Paryan had changed hands several times in the last few days, but that could not be independently verified.

As rumours spread of the Taliban’s takeover of Panjshir, celebratory gunfire resounded in Kabul on Friday night with news reports about the killing of at least 17 people besides 41 casualties.

The emergency hospital in Kabul, however, said two people were killed and 20 wounded by the salvos, as the Taliban tweeted a stern admonishment warning its fighters to stop.

“Avoid firing in the air and thank God instead,” said Taliban spokesman Zabihullah Mujahid, tipped to become the new regime’s information minister. “The weapons and bullets given to you are public property. No one has the right to waste them. The bullets can also harm civilians, don’t shoot in vain.”

Also, Taliban fighters broke up a demonstration by about a dozen women in Kabul urging the group to respect women’s rights to education and jobs, according private broadcaster Tolo news.

Footage showed women confronted by armed men covering their mouths and coughing, and one demonstrator said the fighters had used tear gas and tasers against the participants, who had been carrying banners and a bouquet of flowers.

“They also hit women on the head with a gun magazine, and the women became bloody,” said a demonstrator who gave her name as Soraya.

The Taliban that imposed violent punishments and barred women and older girls from school and work when they were previously in power have sought to present a more moderate face this time.

A Taliban source said the announcement of a new government would be pushed back to the next week.

Taliban co-founder Mullah Abdul Ghani Baradar, reported by some Taliban sources to be in line to lead the new government, said in remarks on Qatar’s Al Jazeera channel that the new administration “will include all factions of the Afghan people”.

“We are doing our utmost efforts to improve their living conditions. The government will provide security, because it is necessary for economic development,” he said.