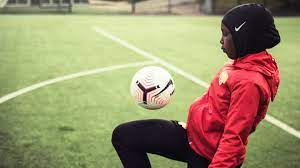 FINLAND: Finland's football association has begun offering a free “sports hijab” to any player who wants one, in a move designed to attract a greater diversity of players into the sport.

So far, the FA has distributed “dozens” of the headscarves, which are made out of technical, stretchy fabric, Heidi Pihlaja, head of development of women and girls' football.

“In Finland, it's been really hard to get girls of immigrant backgrounds into football clubs,” Pihlaja said. “So we wanted to start this initiative to welcome everyone, regardless of your religion and whether you want to use a scarf or not."

“It doesn't flap around as much as normal and you don't need to tuck it into your shirt,” 13-year-old Nasro Bahnaan Hulbade told AFP during a training session at her club VJS in Vantaa, in the Finnish capital.

“It's easier to run in it,” said her teammate Kamila Nuh.

The girls have been playing for one and two years respectively, but said they were “happy and grateful” to find out from their parents about the free headscarves.

Pihlaja said that cultural issues and cost — rather than the headscarves themselves — were often the main obstacles to girls and women from immigrant communities taking up the sport.

But offering the hijabs has “a symbolic importance” to making the sport more accessible, she said.

Although the response has mainly been “really positive,” the scheme has also received criticism “from people saying it demeans women or is bringing religion to the game”.

A 2018 Pew Research Centre comparison found that Finland housed the strongest anti-Muslim attitudes out of 15 countries, while the far-right Finns Party is predicted to make record gains in the country's local elections later this month.

“We support every women's right to choose themselves whether they use a scarf or not,” Pihlaja said in response to the criticism.

“Where they want to use it, we want to show that they are welcome and that the headscarf isn't an obstacle.”

Yet although the FA's announcement prompted a flurry of negative comments on social media, the hijab scheme has not become a major talking point in the country of 5.5 million people, one of Europe's most homogenous nations, according to official statistics.

This month, Finland will make its debut appearance at the European Championships, while the country's women's team has also for the first time made the Euro 2021.

In another move to boost equality, Finland's FA in 2019 removed the word 'women' from the title of its top female competitive division, renaming it the “National league”. It also announced equal pay and bonuses for male and female players in the national team.