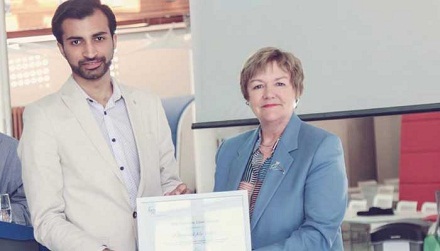 LONDON: Pakistani student Adil Rahoo has become the first-ever international and Pakistani student to have been elected as the President of Glasgow Caledonian University.Originally from Sindh’s Badin area, Adil Rahoo won 733 votes against his runner-up who received 274 votes and 17 other candidates.

Adil Rahoo studied in Karachi and came to Glasgow for further studies where he graduated with a 1st Class Degree in Business and Management. His father Ismail Rahoo is a senior politician and is serving his fourth term as a minister in the Sindh cabinet. His grandfather Fazil Rahoo spent 12 years in imprisonment under various military regimes until he was finally assassinated in 1987.

Speaking to Geo and The News here, Adil Rahoo said he was thankful to the students for electing him with such a high margin and entrusting him to be their leader.“This is a huge honour for me. The campaign turned into a grassroot movement where students themselves started to mobilise each other and the response I received from them was nothing short of phenomenal. I can only thank the students for making me the first foreign student to become the President of the University.”

Adil Rahoo, 25, said that he has been working hard and remained focused on his education besides taking part in student politics.He said: “Before my work as a student leader, I was a very high achieving overseas Pakistani student. By the time I graduated at 24, I had gained almost around 20-30 certificates and awards in my educational life.”

Before being elected as the President, Rahoo served as the Vice President of the University after winning the elections in 2020. Later that year, he ran in a city-wide election and became the chairman of Glasgow Student Forum, in which he chaired the meetings held between the presidents and vice-presidents from all other institutions in the city of Glasgow and lobbied the government and institutions for matters affecting the students of the city.