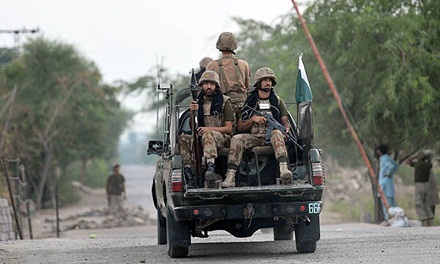 "During the exchange of fire, heavy losses were inflicted on to the terrorists in men and materials," the Inter-Services Public Relations (ISPR) said in a statement.

"A sanitisation/search operation is also in progress to block the escape routes of the terrorists and apprehend the perpetrators," the ISPR said.

"Security forces are determined to neutralise their nefarious designs even at the cost of blood and lives," it concluded.

"Terrorists cannot demoralise us by carrying out such cowardly attacks. The state will fight against terrorists will all its might," he said, adding that FC Balochistan have made great sacrifices for the country's safety and security.

Earlier this month, four soldiers from FC Balochistan, including a junior commissioned officer, had embraced martyrdom in a blast on the Marget-Quetta Road.

According to the ISPR, terrorists had used an improvised explosive device to target the FC troops who were employed on the road for security of Marget mines.