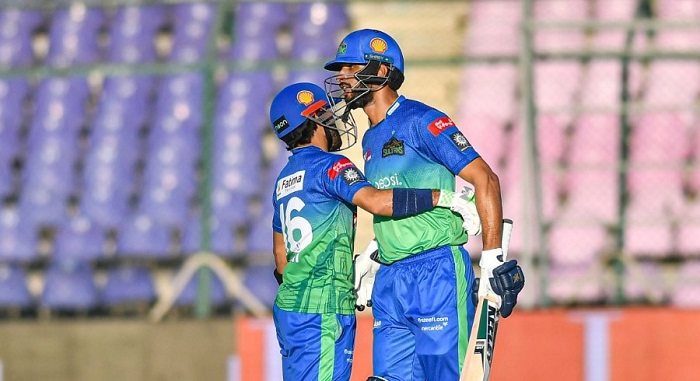 Left-handed Masood made 83 off 50 balls while Rizwan's (69) sublime form in the Twenty20s continued as he scored his second successive half-century in the Multan Sultan's record-breaking chase of 209-5 with two balls to spare. It was the highest-ever successful chase in the PSL.

The Sultans were cruising at 168-1 by the 16th over as Afridi, after conceding 20 runs in his first two overs, came back to clean up Rizwan.

After Afridi took Rizwan's crucial wicket, he was smashed by for three fours, one by South African Rilee Rossouw and two by Sohaib Maqsood.

The next over saw pacer Haris Rauf remove Rossouw on the first ball when the left-handed batsman missed a full and straight ball which dislodged his stumps before Maqsood hit a six.

Sultans needed 17 to win off 12 balls when Shaheen came in to bowl his last over.

The 21-year-old gave away only one run and sent back Tim David and Maqsood, bringing the Qalandars back into the game.

The entire effort, however, was spoiled when the incoming Khushdil Shah smashed Rauf for three consecutive fours and a six, all through the off-side, to wrap up the match with two balls to spare.

This was Sultans' second consecutive win in the ongoing PSL season.

From the side, Masood demonstrated an array of classic cricket shots while Rizwan used power mostly to remove pressure whenever the Qalandars bowlers got a sniff.

Shafique's role in the partnership was of providing Fakhar the platform to be himself and go for the attack and the latter played some beautiful shots all round the circle.

Shafique scored only 24 off 22 balls, hitting three boundaries before being dismissed by veteran leg-spinner Imran Tahir, who made the difference with three wickets in Multan's opening win against Karachi Kings.

Fakhar went on to play until the 12th over, before miscuing a paddle sweep off Ihasunullah for Imran Khan Sr. to take a diving catch at the short fine leg. The hard-hitting southpaw accumulated 76 off 35, smashing 11 fours and two sixes.

It was Kamran Ghulam, coming in at number three, who tried to carry forward the rhythm set by the openers.

The right-handed batsman from Khyber-Pakhtunkhwa announced his arrival at the crease with an exquisite drive through extra cover off a tossed up delivery by Tahir.

Ghulam took on Tahir again when he hit one over the extra cover in the 11th over.

After Fakhar's departure in the next over, Ghulam was joined by another seasoned campaigner Mohammad Hafeez, who also got off the mark with a boundary against Ihsanullah.

With Ghulam clearly looking dangerous, Rizwan expressed confidence in Tahir to take the batter's prized wicket. The South African, however, lost a chance after Ghulam played it straight to him on the third ball of the over.

The right-handed batter punished Tahir for his mistake when he pulled to clear the midwicket boundary off a half-tracker at the end of the over.

Rizwan introduced Khushdil into the attack to put a break on Ghulam's knock, and the plan worked with the Sultans conceding only 10 runs in the next two overs.

Khushdil dismissed Hafeez in his second over, taking a catch off his own bowling when the 40-year-old mistimed a straight drive after adding only 16 off 12 balls.

Ghulam hit another six and a four in the next two overs off Dahani and David Willey, but the English cricketer finally got him when Ghulam tried to clear the square-leg boundary off a back-of-length ball, only for Dahani to take a simple catch.

Lahore were 169-4 when Ghulam departed after adding 43 off 31 balls, hitting two fours and three sixes.

From that point, it was South African all-rounder David Wiese (13 off 5) and Afghan leg-spinner Rashid Khan (17 off 4) who hit two sixes each, while the latter smashed a four as well, to help Lahore go past 200.