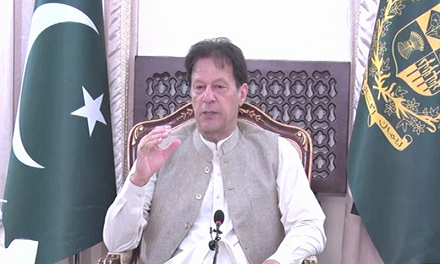 Chairing a meeting in Islamabad on Friday regarding increase in foreign remittances, he said overseas Pakistanis are a precious asset of the country.

He said the remittances sent by them have an important role in the country's economic stability.

The Prime Minister said the government is determined to extend full facilitation to overseas Pakistanis and their families.

Imran Khan also emphasized the need for evolving a strategy to achieve the targets set for different sectors.

The meeting was informed that the National Remittance Loyalty program will soon be introduced for the facilitation of overseas Pakistanis.

Under this program, a mobile app will be launched and more financial incentives will be extended to overseas Pakistanis.

The program will be launched in cooperation with different departments including PIA, FBR, NADRA, State Life, OPF and Benevolent and Old Age Employees Fund.

It was informed that Roshan Apna Ghar Scheme will also be launched soon for overseas Pakistanis.

The Board of Investment informed the meeting that every possible effort is being made on the part of the government to facilitate the foreign investment in the country.

The State Bank of Pakistan apprised the meeting that the government's policy of extending incentives to the overseas Pakistanis is yielding positive results.

The meeting was informed that about 1.561 billion dollars have so far been received in Roshan Digital Account in a short period of ten months and there is a consistent increase in inflows.