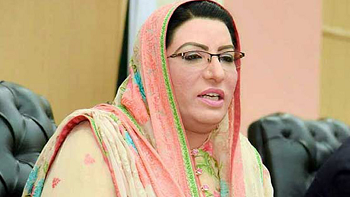 ISLAMABAD: The government on Wednesday sought the opposition’s support to jointly fight global disease of coronavirus while announcingthat its suggestions would be incorporated in the national roadmap being devised to handle the situation.

“We invite the opposition to give us productive suggestions and avoid mere criticism as a national obligation, because it is time to shun differences and fight the deadly virus collectively,” Special Assistant to the Prime Minister on Information Dr Firdous Ashiq Awan said at a press conference while informing the media about the decisions taken at a cabinet meeting.

The government extended an olive branch to the opposition only a few hours after what the opposition called “prime minister’s exit” from a meeting of parliamentary leaders held to discuss measures to prevent the spread of Covid-19 in the country.

Leader of the Opposition in the National Assembly and Pakistan Muslim League (PML-N) president Shahbaz Sharif and Pakistan Peoples Party (PPP) chairman Bilawal Bhutto-Zardari said the prime minister had left the meeting because he was still not ready to sit with the opposition.

At the presser, Dr Awan criticised Mr Sharif and said his speech during opposition’s multi-party conference was “a bundle of unrealistic desires”.

The PM’s aide said Mr Sharif should bring back his money and family’s offshore assets to the country so that they could be utilised to mitigate the sufferings of Pakistanis.

“It is the best time for the opposition leader to play his due role by bringing back his money and family for the betterment of people because the money actually belongs to the people,” she added.

Dr Awan said she got to know that Mr Shairf and Mr Bhutto-Zardari had restrained from giving suggestions during the meeting of parliamentary party leaders chaired by the premier on Wednesday.

However, she said: “PML-N is ruling in Gilgit-Baltistan and Azad Jammu and Kashmir while PPP is the ruling party in Sindh. Therefore, it is the need of the time that everyone should fulfil his responsibilities and forge national harmony.

“Let us jointly eradicate this fatal disease under the leadership of Prime Minister Imran Khan. We will eliminate this pandemic with the help of provincial governments and media.”

Talking about the relief package, Dr Awan said the cabinet congratulated the prime minister on it and hoped that its benefits would soon reach the needy and deserving people.

She said the prime minister was in close contact with world’s leaders on the issue of coronavirus and urged the world community and the United Nations to lift embargoes on Iran so that one of the worst-hit countries could save its people. She said the government of Iran hailed Pakistan’s stance on the issue and decided to move the International Court of Justice.

Dr Awan said the prime minister had decided to soon form a youth volunteers force to assist the government in providing food items to the poor at their doorsteps amid coronavirus spread. Similarly, he also decided to launch a fund of overseas Pakistanis which would be spent on the poor segments of society, she added.

She said the cabinet had deferred a proposal regarding the national electric vehicle policy and decided to send the matter to the Council of Common Interests.

Dr Awan said the minister for planning and development, while briefing the meeting, expressed satisfaction over economic indicators. She said that according to the minister, 34 per cent reduction was recorded in current account deficit, over $15.1 billion foreign remittances had been received, trade balance improved by 34pc, with 11.7pc inflation, $3,988 million foreign investment, Rs2,725bn tax had been recovered till February, Rs237bn had been spent under the Public Sector Development Programme and Rs219bn had been utilised under the annual development fund.