Govt suspended all types of domestic flights, exemptng flights from Islamabad to Gilgit-Skardu 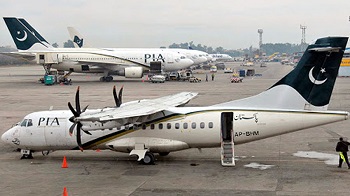 ISLAMABAD: The government on Thursday suspended all types of flights including domestic and chartered flights in the country till April 2. According to spokesperson of Civil Aviation Authority (CAA), all domestic, chartered and private flights will be suspended; however, cargo and flights with special permission letters are exempted from the ban.

RAWALPINDI: The government has decided to exempt flights from Islamabad International Airport to Gilgit and Skardu from suspension of domestic flight operation which will come into force from March 26 (today).

The move came as a precaution against coronavirus which had already forced the government to suspend international flight operation till April 4.

On the other hand, Pakistan International Airlines has decided to operate four international flights for the passengers who had been stranded in Pakistan due to closure of flight operation.

PIA spokesman Abdullah Hafeez said in a press release that of the four flights, three will be operated for the UK and the remaining one for Canada.

He said all the four passenger planes will be back empty. PIA is booking seats in the two special flights on first come first served basis, he said.

The spokesman said following prime minister’s directives the domestic flights for Gilgit and Skardu was started only to facilitate people of northern areas and to provide them basic needs in the emergency situation.

He said all the PIA planes were disinfected properly and passengers boarding on flights were scanned at the airports.

Meanwhile, Federal Minister for Aviation Division Ghulam Sarwar Khan said the aviation industry around the world was facing immense losses due to the spread of coronavirus as Pakistan International Airline (PIA) has also incurred a loss of Rs4 billion till March 25.

In a statement issued on Wednesday he said that the entire expected loss of PIA for the March could reach Rs6 Billion. Civil Aviation Authority has incurred a loss of Rs600 million from March 1 to March15, which is expected to grow.

Aviation Minister said that PIA had arranged 27 special ferry flights in order to bring back 8,824 Pakistanis stranded in Saudi Arabia.

Meanwhile, Federal Aviation Minister Ghulam Sarwar Khan has appealed to all segments of the society including media to support the present government in its fight against the virus.