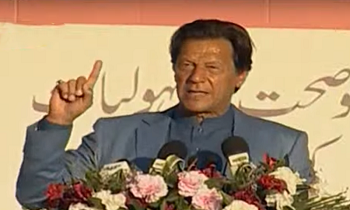 ISLAMABAD: Prime Minister Imran Khan Wednesday said the government will distribute a total of Rs 144 billion among 12 million poor families affected by the ongoing lockdown in the wake of coronavirus pandemic across the country during the next two-and-a-half weeks.

The distribution of Rs 12,000 per family, being started from Thursday (today) under the unprecedented Ehsaas Emergency Cash Program, is aimed at reaching out to the poor and catering to their essential financial needs in this critical situation faced by the country and nation, he said while talking to media persons here after presiding over a meeting of the National Coordination Committee (NCC).

The prime minister assured that the whole process of distribution of money under the Ehsaas Emergency Cash Program is fully automated and transparent, and every effort has been to made to make it apolitical and merit-based. He said a total of around 750,000 volunteers have so far got themselves registered with the Corona Relief Tiger Force, which will assist the government functionaries in reaching out to the poor in rural and urban areas and help identify the poor and needy families affected by the coronavirus situation.

Prime Minister Imran Khan said with a database of 80 to 90 million poor and deserving already developed by Dr Sania Nishtar, 35 million more people have applied for the cash assistance. He said the cash assistance to poor families under the programme is non-political as being given purely on merit and through an automated data verification system with no human interface. He said 17,000 points are being established across the country to facilitate the distribution of Rs 12,000 per family.

The prime minister said as Pakistan, when compared with rich counties in the world, lacks resources to tackle the big challenge of COVID-19, the youth and charity giving people of country will fill the gap of resources. He also urged the political workers including the members of national and provincial assemblies to participate in the Corona Relief Tiger Force.

Reiterating his appeal to the masses to understand the gravity of situation caused by the coronavirus, the prime minister urged them to take preventive healthcare measures such as staying at homes, maintaining social distancing and avoid gatherings to check the spread of the deadly contagion.

The prime minister the impression that the slow rate of COVID-19 spread with less mortality in Pakistan is due to strong immunity of the people in the country is totally wrong, and could lead to enhanced spread of the disease due to the attitude of carelessness. He said the carelessness of young and healthy people could threaten the lives of elderly and ailing, considered as vulnerable.

Prime Minister Imran Khan warned the cases could see a massive rise by the end of April and crash the healthcare system, leading to some ‘tough decisions’, if people continued to circumvent lockdown rules. He hinted at an extended lockdown, saying the government will have to take tough decisions if the situation turned worse. He said the coronavirus is not going to go away any time soon. “This is not something that will go away in two or three weeks, this will go on for some time.”

Imran Khan said as the country’s hospitals and healthcare facilities are not capable of catering to the large number of patients, the best option to tackle the challenge is prevention through various measures. He, however, added that the government is working hard to strengthen the healthcare system by importing medical equipment and other materials, including the ventilators.

He expressed his concern over the recent incident of a clash between police and young doctors in Quetta and said the government is taking every measure including the import of protection materials to ensure the provision of personal protection equipments (PPEs) to doctors and health workers across the country.

The prime minister said keeping in view the hardships faced by the people, especially the poor and daily-wagers due to the lockdown, which otherwise was important to check the spread of coronavirus, the government has decided to open the construction industry from April 14. He further said there is no lockdown in villages and the agriculture sector is already open to ensure the availability of food commodities in the country.

The prime minister reiterated that with a mere $8 billion relief package announced by his government as against $2,000 billion by the United States, $1,000 billion each by Germany and Japan to tackle the situation arising out of the coronavirus pandemic, Pakistan can only fight and win the war against COVID-19 through courage and unity as a nation.

The prime minister said arrangements are being made to bring those Pakistani expatriates back home who desire to come back due to the problems faced by them in the wake of COVID-19 pandemic. Deliberations on the issue are being made at the forum of National Command and Operation Center (NCOP) on daily basis, he added.