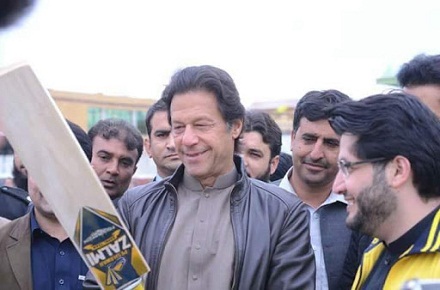 ISLAMABAD: Prime Minister Imran Khan on Saturday visited the Korang Cricket Ground, being developed by Capital Development Authority (CDA) and announced that he plans to establish at least one sports ground in all union councils across the country.

The Korang Cricket Ground, being developed in UC Bani Gala, is the first organised cricket facility to be established in a rural area of the federal capital. “We are confident that the ground will be completed by the target of July 15, as there is no major construction work involved,” said a senior official of the CDA.

Officers of the CDA and the ICT administration involved in levelling the ground and putting things together have appealed to locals that it would be their responsibility to maintain the place in the long run.

Cost for construction of the Korang Cricket Ground was negligible as it is being built on CDA land while levelling of the ground and other infrastructure development is being executed by machinery and manpower belonging to various departments of CDA.

“This occasional rainfall in the city is helpful in getting grass to attain roots after plantation and as monsoon season is approaching, we expect that the grass will flourish by mid-July,” said a CDA officer involved in development of the cricket ground.

Radius of the ground is 215 feet, which is the average size of cricket grounds in Islamabad whereas experienced gardeners of Islamabad have already planted grass patches.