Govt to extend suspension of intl flights till May 15 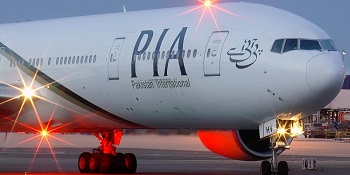 The suspension of the international flight operation was made as the number of confirmed cases of coronavirus in the country crossed the 12,500 mark with over 270 deaths.

The Aviation Division said relief flights having special approval, special and cargo flights would continue their operation as per the permission granted to them by the government. The United States and the United Kingdom had been operating chartered flights to repatriate their citizens stranded in Pakistan.

Meanwhile, many airlines have introduced measures in order to maintain physical distancing on board aircraft during the coronavirus crisis, but the Pakistan International Airlines has no such policy while taking relief flights from Pakistan. The national flag carrier, however, is offering an option to passengers to sit next to an empty seat while travelling to Pakistan from abroad.

A spokesman for PIA, Abdullah Hafeez, said that the national flag carrier had no policy to maintain onboard physical distancing while flying from Pakistan, but on return to the country the airline had to keep around half of seats in the planes empty.

“Yes, PIA has no policy of maintaining physical distance due to rush of travellers from Pakistan. However, we have to keep one seat empty on return due to some embargos,” the spokesman said.

In line with SOPs (standard operating procedure), all passengers were subjected to health screening and temperature check before they boarded the aircraft. The US embassy had established facilitation counters at Islamabad and Karachi airports to assist the passengers.

The third, PK-8749 carrying 393 passengers, departed for Frankfurt from Islamabad.

Another PIA flight PK772 carrying 46 passengers arrived Islamabad from Oslo on Sunday. On arrival all passengers were subjected to screening and later they were shifted to a hotel for quarantine. Likewise, more than 600 people departed for the UK and Canada on two PIA flights from Lahore on Sunday.