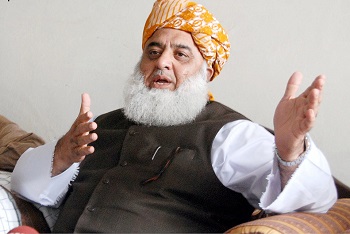 He said security situation in the merged tribal districts was deteriorating day by day and it seemed new militant groups had surfaced in the areas along the Afghan border. “We are suspicious about surge in the targeted killing and resurgence of new terrorist groups in the region and these developments are happening under the nose of the institutions,” he said, adding that the question was why the security forces had made tall claims that terrorism had been wiped out from the tribal districts.

He further said that army and intelligence agencies should stay away from the election process, as police are enough to provide security during the polls.

“The main point is that the army and intelligence agencies should not be involved in the entire election process. I think deployment of troops at the polling station
is also an insult to the army, as our police can fulfil this task,” said JUI-F chief at a press conference on Sunday.

The Maulana endorsed a suggestion of the opposition leader in the National Assembly that an all-party conference be convened to build consensus on electoral reforms so that free and fair elections could be ensured. He said the JUI-F had started homework for the conference and suggested that a representative of the Election Commission of Pakistan (ECP) be invited to the proposed APC to understand its point of view.

When asked about the government’s move to provide the voting right to overseas Pakistanis in the next general elections, the JUI-F chief said: “We can’t protect polling stations in Pakistan, then who will ensure sanctity of ballot papers abroad.”

In response to another question, the Maulana said his party sympathized with the Janikhel tribe that had been protesting for more than 20 days against targeted killing. He said the protesting tribesmen and the relatives of the slain elder, Malik Naseeb, were compelled to announce that they would march on Islamabad in the coming days as the culprits had not been arrested since May 31.

The merger plan of the erstwhile Federally Administered Tribal Areas (Fata) and Khyber Pakhtunkhwa had failed, because the new administrative and legal system had not delivered, he added.

The Maulana criticised the government for reducing the allocation for development funds for the merged districts from Rs100 billion to Rs54bn and said Fata people were regretting their merger with KP.

Expressing concern over the situation in Afghanistan, the JUI-F chief said his party had always told Islamabad to review its Afghan policy. He demanded immediate implementation of the all clauses of the historic agreement between the Taliban and the United States. “This is a dilemma that anti-Pakistan elements are strengthening their role in Afghanistan while Pakistan’s role is weakening day by day,” he said, adding that Pakistan had lost Kashmir because of weak leadership.

The Maulana, who also heads the opposition Pakistan Democratic Movement (PDM), said the PDM would use democracy as a weapon to unseat the PTI government and in this regard, the movement was gearing up to hold a grand rally in Swat on July 4, followed by another massive show in Karachi on July 29.