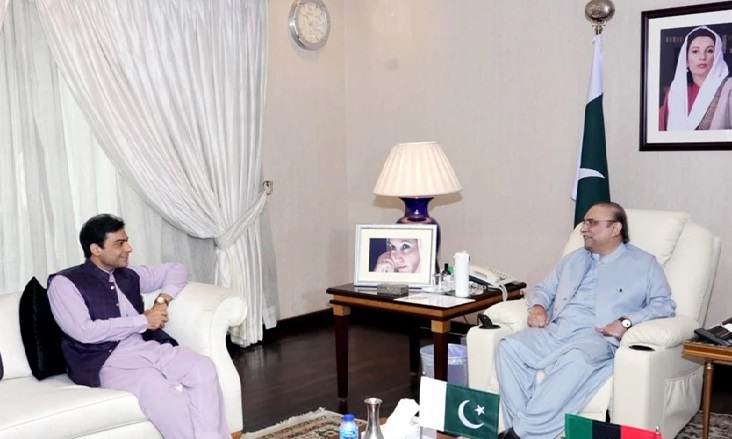 LAHORE: Chief Minister Hamza Shehbaz called on Mr Zardari at Bilawal House in Bahria Town and discussed in detail the above matters.

Regarding their ‘differences’ over allocation of ministries, Mr Tarar said: “If there was any such issue, it has been sorted out.”

When asked about the reasons for not awarding portfolios to the eight members of Hamza’s cabinet and the delay in its expansion, the minister said: “Both are likely to be finalised before this month’s provincial budget.”

The Punjab chapter of the PPP had complained to Mr Zardari that Hamza Shehbaz was reluctant to give its lawmakers in Punjab their ‘agreed share’. The PPP has seven seats in the Punjab Assembly and they were reportedly promised four ministries and two adviserships by the Sharifs.

The party is interested in the portfolios of finance and communication & works, but the thinking in PML-N circles is that such key seats should not go to the PPP. In the existing eight-member cabinet, two members are from the PPP, but they remain ‘inactive’ in the cabinet and other meetings due to non-allocation of portfolios.

Similarly, PPP parliamentary party leader Hasan Murtaza has also been pushing Hamza to give him the ‘senior minister slot and also another ministry’, but to no avail.

The PML-N has its own internal problems which is making things difficult for them. PML-N vice-president Maryam Nawaz wants to have her say in the formation of the cabinet as well, especially in the allocation of portfolios, while Prime Minister Shehbaz Sharif wants his son to give preference to those who were a part of his (Shehbaz’s) cabinet.

“The prime purpose of Mr Zardari’s visit was to counsel ‘inexperienced’ Hamza on how to negotiate the challenges in Punjab while taking their allies (PPP and dissident PTI groups of Tareen, Aleem and Khokhar) onboard,” a party source said.

Besides, Mr Zardari also tried to explore whether they could pitch a few PPP candidates in south Punjab where they believe they have a good base, for next month’s by-polls. “It was a smart move from Mr Zardari to tell the Sharifs that if the PPP agrees on ‘joint candidates’ (a reference to de-seated PTI dissidents) he would be doing so merely for the wider interests of the coalition government.”

Interestingly, the PML-N has awarded its ticket to only a handful of de-seated MPAs whom the Pakistan Tehreek-i-Insaf (PTI) calls lotas or turncoats. Those interested in PML-N tickets fail to understand the reasons behind the delay in the party decision-making.

The PML-N leaders of the by-poll constituencies are reportedly not happy with the Sharifs for ignoring loyalist workers at the expense of ‘turncoats’.

The PML-N may award its tickets to these de-seated PTI MPAs until Jun 24, as per the Election Commission of Pakistan’s deadline.

The ECP had de-seated 25 PTI defectors for voting for Hamza last month thus leaving the incumbent CM vulnerable with a short of majority in the Punjab Assembly. The PTI and its ally party PML-Q have declared Hamza an “illegal CM” after losing majority in the House thus calling for a run-off election (of the chief minister).

Of the 25 five de-seated MPAs, five of them were on reserved seats and the ECP said allocation (of the five) would be made after the result of July 17 by-polls on 20 seats.