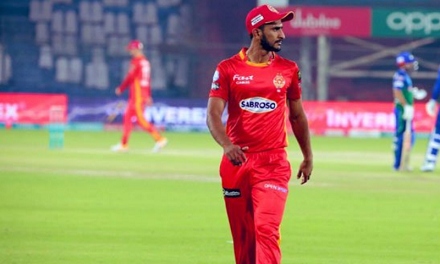 TRENT BRIDGE: Fast bowler Hassan Ali will not be a part of the playing XI today (Friday) for the first T20I against England  as the team management has decided to rest him.

The right-arm pacer has been affected by a leg strain which has forced the management to rest him. Ali picked up the leg strain during a practice session on Thursday at Trent Bridge.

The fast bowler will now be assessed ahead of the second T20I, following which decision on his participation will be made.

Pakistan will attempt to shrug off their embarrassing 3-0 ODI series loss to a second-choice England squad Friday as they take on the hosts in the first T20I at Trent Bridge.

England will be emboldened by the return of skipper Eoin Morgan, Jason Roy, Jonny Bairstow, Moeen Ali, and Jos Buttler and four others who had to complete their period of isolation after seven members of the squad tested positive for coronavirus.

Trent Bridge will offer flat wickets and a shorter boundary for the batsmen to score more runs. Pakistan found its form late with the bat, scoring a mammoth 331 runs in the third and last ODI.

The Pakistani captain had said that the side will aim to bounce back in the series.

"In the international level when you play against topsides, the margin of error is negligible. When you lack in one or two departments, you have to improve those and I believe bad days will come but the effort will remain to bounce back in the upcoming T20 series," he had said.

The match is scheduled to begin at 10:30pm PST.