Highest number of deaths in a single day 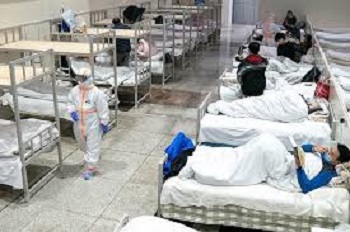 ISLAMABAD: As coronavirus cases surpassed the 15,000 mark with the highest number of deaths in a single day, the government on Wednesday decided to bring back 7,500 overseas Pakis­tanis in the first week of May.

Moreover, at the request of Afghanistan, the government decided to allow export of non-essential goods along with essential items to the neighbouring country.

Special Assistant to the Prime Minister (SAPM) on National Security Dr Moeed Yusuf said at a press conference that 26 persons died during the past 24 hours while 44 were in a critical condition. However, he said the mortality rate was only 2.1 per cent in Pakistan as compared to around 7pc in other countries.

“Moreover, 80pc of the deceased were over 50 years old and 70pc of the overall deceased were suffering from some other critical diseases [such as cancer, heart problem and diabetes],” he added.

Since a large number of overseas Pakistanis have been trying to return to the country, Dr Yusuf said, it had been decided to bring 7,500 Pakistanis from different countries during the first week of May.

“Our major focus will be on the Gulf states as thousands of Pakistanis have become jobless or their visas have expired. So they will be brought back from Saudi Arabia, Oman and the United Arab Estates. Some flights will be operated from Sudan, Kenya and the United Kingdom,” he added.

“Moreover, Qatar Airways will be hired to bring Pakistanis from America, Australia and Africa. Those who are abroad should contact the embassies to register themselves as the embassies are preparing lists considering the situation and conditions and who should come to Pakistan first,” he said.

Dr Yusuf said there was no restriction on the persons wanted to go abroad and advised them to travel via the Pakistan International Airlines.

Talking about the policy for overseas Pakistanis, the SAPM said they had to stay in quarantine for 48 hours after their arrival, but it could take some more days before allowing them to join their families. “Tests are conducted after 48 hours, but it can take another 24 to 36 hours to get results depending on the number of pending samples in labs. Moreover, even if a passenger’s test is declared negative, he/she can be kept in quarantine for a few days because sometimes tests of a large number of passengers are confirmed due to which those who are declared negative also become vulnerable to the disease,” he explained.

Dr Yusuf said a number of passengers insisted that they should be allowed to leave because they were not sick without realising that they could be asymptomatic.

He said the Torkham and Chaman borders were opened on April 10 for export of essential items to Afghanistan. “However, now it has been decided to allow exporters to export non-essential goods as well. Moreover, there are five districts in Balochistan which get essential items from Iran so trade from Iran to those districts is also allowed.

“However, the border with India will remain closed. There are some Pakistanis stranded in India, but they are not allowed by India to return [to Pakistan] due to lockdown there. We have been trying to bring them back at the earliest,” Dr Yusuf said.

Meanwhile, the Sindh government reiterated that it was not going to lift lockdown imposed about a month ago to contain the spread of the coronavirus.